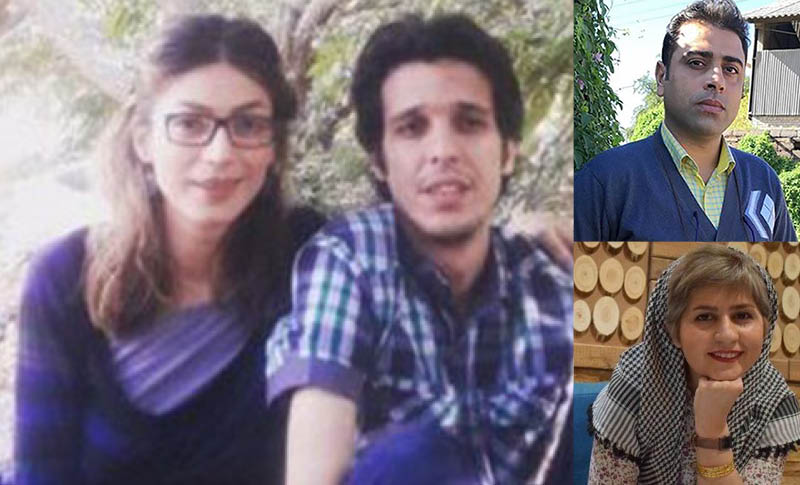 On September 7, Iran regime’s Revolutionary Court in Tehran, presided by Judge Mohammad Moghayseh, condemned 6 labor and civil rights activist to the total of 110 years in prison. The list includes: Esmail Bakhshi, condemned to 14 years in prison and 74 lashes, Mohammad Khonifar to 6 years in prison, Sepide Ghelyan, Amir Amir-Gholy, Amir-Hossain Mohammadi-Far and his wife Sanaz Alahyari and Assal Mohammadi, each condemned to 18 years in prison. The case of Ali Nejati, another activist is still open.
These activist were arrested for participating in the long sit-in and protest of the Haftappe Sugar Factory, in the southern city of Ahwaz.

Sepide Ghelyan, during the court session said that she was mistreated during the interrogation and was forced to confess, therefore she didn’t accept the charges.

According, to Jamal Haydari, Ms. Ghelyan’s attorney, his client was under a tremendous pressure therefore, the allegations and charges against her were baseless; Haydari reiterated that her support of workers is not a crime but her civil right.

Esmail Bakhshi, labor activist and Sepideh Ghelian, civil rights activist, are now being held in Evin and Qarchak prisons; The Iranian regime’s security forces arrested them on January 20, 2019 and transferred them to Shiban and Sepidar prisons in southern province of Ahwaz. Ms. Ghelian and Mr. Bakhshi were arrested on 20 January, a day after their forced confessions under torture along with the one of Mr. Ali Nejati, head of the labor syndicate of Haftappe sugar factory, were broadcasted by the state TV.

On January 16, 2019, in the northern city of Babolsar, Iran regime’s Ministry of Intelligence and Security (MOIS) agents, arrested Mr. Amir Amirgholi , member of the Gam magazine’s editorial board, and transferred him to the section 209 of Evin prison in Tehran and he is currently in section 4. Mr. Amirgholi was previously arrested and transferred to the quarantine section of Ahwaz’s Sheiban priosn.

In addition, Sanaz Alah-Yari, along with her husband, Amir Hossain Mohammadi-far were arrested on January 19, 2019 and Mehdi Farahi Shandiz, another labor activist was previously condemned to 9 years in prison.

Hundreds of people were arrested around Ahvaz last year amid protests against the regime’s discriminatory policies, water and power cuts and poverty. Despite regime’s repressive measures, the protests in Iran continues.