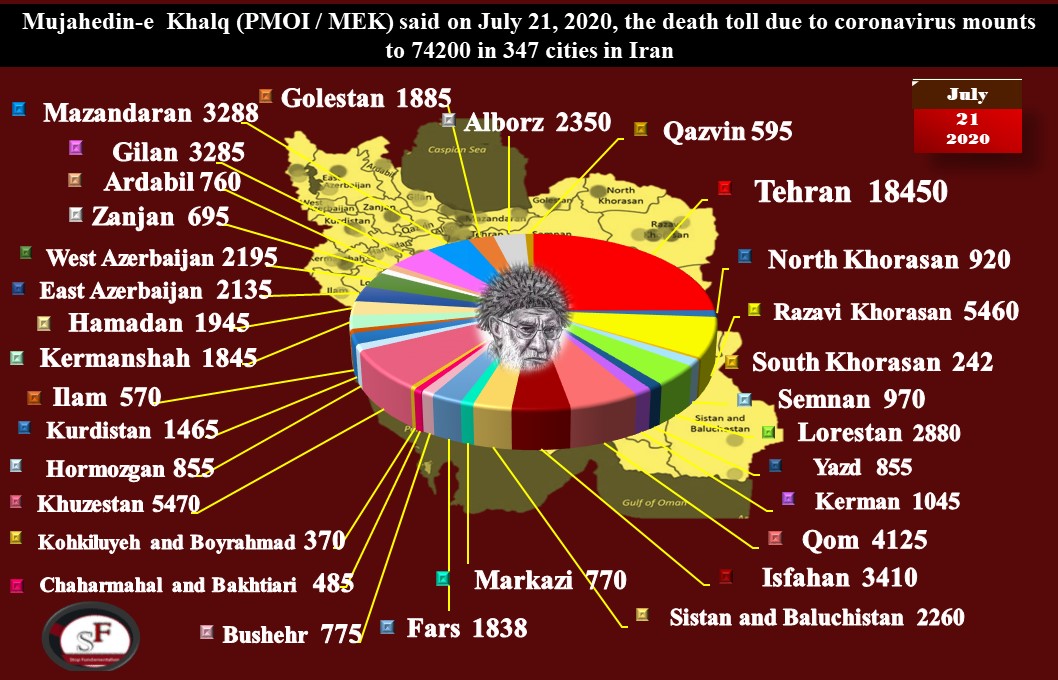 More than 74,200 Iranians have died from coronavirus, according to the People’s Mojahedin Organization of Iran (PMOI / MEK Iran) on Tuesday, while the regime reported a death count of just 14,634, in an attempt to hide their mismanagement.

More than 74,200 people have died of the novel #coronavirus in 347 cities checkered across all of Iran’s 31 provinces, according to the Iranian opposition PMOI/MEK.

The death tolls in the provinces were:

Although the regime is vastly underplaying the scale of the coronavirus crisis, the Health Ministry did report that 229 people died in the 24-hour period between Monday and Tuesday, while 3,589 people were in intensive care and in “dire condition”. Both figures are the highest reported by the regime since the outbreak began in January.

Over 74,200 people have died of the novel #coronavirus in 347 cities checkered across all of #Iran’s 31 provinces, according to reports tallied by the Iranian opposition PMOI/MEK as of Tuesday afternoon local time, July 21.https://t.co/pnlkFgJQEi

The spokesperson also said that the provinces of Mazandaran, Fars, East and West Azerbaijans, Razavi Khorasan, Alborz, Khuzestan, Lorestan, Golestan, Kerman, Zanjan and Ilam, were all in a grave position while listing several more that were heading that way.

Deputy Health Miniter Ghasem Jan-Babaie said that the regime doesn’t “know when the peak of the virus will end in these provinces”, while Reza Golpira, the Director of the Health Ministry’s Hospital Management Center, said that 50% of coronavirus deaths are happening in Tehran and that 12,000 medical staff have contracted the disease since February.

The deputy dean of Shiraz Medical Sciences University said that 15 people of coronavirus in the past 24 hours, with 16 deaths in the day previous.

The dean said: “The number of coronavirus deaths in Fars is alarming and 90 percent of ICU beds are filled.”

Many hospitals have run out of room for patients, or are very close to it, with the added danger that remaining medical staff is “exhausted” and the equipment at hospitals is “aged” or in short supply.

The dean of Alborz Medical Sciences University said: “Most cities across the country are in an alarming state, filled hospital beds and the exhaustion of the medical staff are causing problems in treating patients… Without a doubt, the next wave of the disease in September and October will be worse.”

While there is also an especially underprivileged group that may be more affected than others – children with autism and their families.

The Director of the Autism Association in Tehran said Sunday: “The number of Covid-19 cases among children suffering from autism and their families has increased ten-fold in the second wave in comparison to the first wave.”