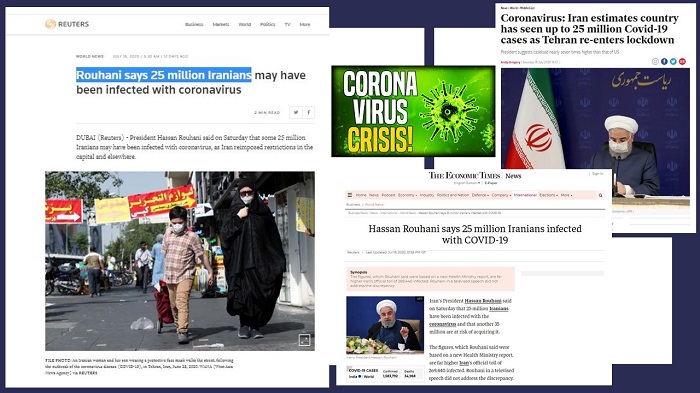 On July 18, the Iranian regime’s President Hassan Rouhani admitted that 25 million Iranians had already been infected with the virus and predicted that another 30 to 35 million will be infected.

This admission has gone almost unnoticed around the world. The few news dispatches that have alluded to it have downplayed the seriousness of the Iranian President’s remarks.

According to the semi-official news agency ISNA, a member of the National Coronavirus Control Committee, Minoo Moharrez, said that 20% of the Iranian society has been infected and 40 to 70% more will be infected as well.

For molecular epidemiologist Emma Hodcroft of the University of Basel, such a level can be significant because it is considerably higher than elsewhere. “An HIV-positive rate of 30% in one country, according to the figures given, would be by far the highest of any country,” she said, pointing out that such a rate has been found only in heavily affected areas like New York City, which has a smaller and more densely populated population than Iran.

Based on this average rate and the number of infected people announced by Rouhani and other Iranian authorities, the death toll in Iran would be around one million! However, the Iranian regime never gives the real figure.

The #MEK reported on Wednesday that more than 78,800 people in 347 cities from all 31 Iranian provinces have lost their lives from #COVID__19 The #Iranian regime has confirmed 16,343 of these deaths or approximately one-fifth of the actual total.#Iranhttps://t.co/CqwblnC2L7 pic.twitter.com/GhltfQkQrv

On the one hand, he admits that 25 million people have been infected, and on the other hand, he claims that only 14,000 have died, according to the figure announced on 19 July. The Iranian opposition, MEK, based on information obtained by its internal network, puts the figure at 73,200 deaths in only 350 cities on 19 July, i.e. a third of Iran’s cities. Is it possible to obtain an approximate statistic in all the cities of Iran by tripling this figure which would give 219600 deaths for the same date?

In Khorasan Razavi province, Ali-Asghar Anabestani, a regime Parliament deputy told the Parliament’s website, July 28, 2020, “The government dropped the management of the Coronavirus to improve the country’s economic situation and somehow sold people’s lives to their pockets. In recent days, while we are witnessing an increase in cases of Coronavirus in Khorasan Razavi Province, there is no sense of responsibility in the executive branch… The number of Coronavirus deaths in my constituency has reached five per day, which is much higher than the country’s and the world’s average. The number of fatalities is seriously alarming for the country.”

More than 78,800 people have died of the novel #coronavirus in 347 cities checkered across all of Iran’s 31 provinces, according to the Iranian opposition PMOI/MEK.

Rouhani always blames those who don’t observe social distancing. But on Saturday, July 25, he declared that “the mourning ceremonies of Moharram’s holy month should be held in every town and village, regardless of their status (red, yellow or virus-free). Massih Mohajeri, the editor of the daily Jomhouri-Eslami and former adviser to former Iranian regime presidents Rafsanjani and Khatami, wrote in an editorial on 26 July: “Mr. President, as the commander of the National Coronavirus Control Centre (NCCC), you are responsible for people’s lives. It is clear that these new decisions by the NPCC will inflict the same disaster on the population as the lifting of health restrictions. Think of the bitter reality that with these decisions, a dark fall awaits our country. »

The state-run daily, Mostaghel wrote today, “When Mr. Rouhani orders large-scale rallies in the month of Muharram and on the other hand blames weddings and mourning for the spread of the Coronavirus, he really induces a sense of living in a circus for the citizens, or rather in an Orwellian animal farm. People are clueless, facing carefree authorities! They feel that they have been deliberately left to die.”