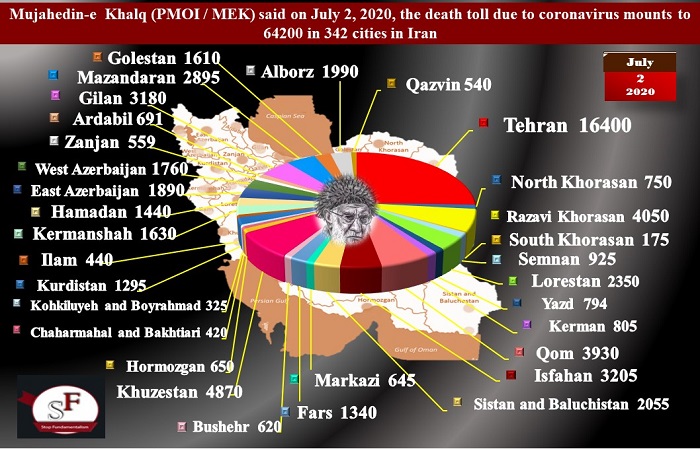 According to the latest report from The People’s Mojahedin Organization of Iran (PMOI / MEK ), the Coronavirus death toll in Iran is more than 64,200.

A spokesperson for the Health Ministry of the mullahs’ regime told the official news agency IRNA, that “There has been a significant increase in hospitalizations in Tehran Province.

” According to state-run Mehr news agency, Iraj Harirchi, the regime’s Deputy Health Minister said, “Khuzestan has one-third of the country’s hospitalizations and deaths.”

Mohammad Reza Mahboobfar, a member of the National Coronavirus Task Force (NTTC), was quoted by the Mehr news agency as saying, “Three out of ten people in Isfahan carry the virus. With Coronavirus spreading in the country, deaths are on the rise. I can dare say that two people die every 15 minutes (192 in 24 hours) because of this disease.”

The director of the Infectious Diseases Department at Masih Daneshvari Hospital in Tehran told the state-run daily, Hamshahri, “The number of hospitalized patients has exceeded the number of discharged patients … The unavailability of beds has made it impossible for us to be able to hospitalize some of them. In our opinion, Tehran is red.”

In Tehran, Alireza Zali, head of the NCCT, told the state TV that “The figures in Tehran are changing worryingly…For the first time, the number of those hospitalized has surpassed the number of discharged patients.”

Nahid Khodakarami, head of the Tehran City Council’s Health Commission, was quoted by the Modara website yesterday, “Since the beginning of the Coronavirus outbreak, more than 5,000 Tehranis have lost their lives”.

More than 64,200 people have died of the novel #coronavirus in 342 cities checkered across all of #Iran‘s 31 provinces, according to the Iranian opposition PMOI/MEK. pic.twitter.com/oJX7lJHm5y

In Fars, the president of the Medical Sciences University in Shiraz told the Tasnim IRGC news agency, “In recent weeks more than 400 medical personnel in the Province contracted the virus. Exhaustion among the personnel is very high.”

The deputy head of NCCT in Tehran told ISNA said, “We are facing exhaustion and extreme fatigue among the medical staff. The continuation of this process severely weakens their ability … and will lead to a very sharp increase in mortalities…

In Lorestan, according to doctors, the situation in Borujerd and Khorramabad is dangerous. In Selseleh and Delfan counties, at least 100 people have died from Coronavirus, which is not counted in any statistics. At least 10 percent of nurses are infected with the virus. Soon, the medical staff will be out of the treatment chain. Hospitals are short of nurses. However, the regime does not give employment permits to hospitals, and they employ nurses as 89-day workers so as not to pay for their insurance. University of Medical Sciences’ presidents no longer have the money to provide masks and materials.

In Khorasan Razavi, the secretary of the Coronavirus working group at Mashhad University of Medical Sciences told IRNA, ” The number of hospitalized patients is more than 600, which is the highest during the Coronavirus outbreak”

In Khuzestan, a Parliament Deputy told the Parliament, “Government officials did not make a single, decisive, and comprehensive decision to control the Coronavirus. They failed in making smart decisions to get the desired results. It now too late because we have lost many of our fellow residents due to the virus, and the country has incurred great costs.” He called for declaring an emergency in the Province and imposing stricter restrictions in Khuzestan Province.

In West Azerbaijan, a regime Parliament Deputy from Bukan told the Parliament’s website, “. If the Government would provide some resources to the people so that they could stay home and lock down their businesses for a month, the spread of the virus will, to a large extent, be prevented, and hospitals would not run into difficulties.”

In Khuzestan, a Parliament Deputy told the Parliament’s website, “Government officials did not make a single, decisive, and comprehensive decision to control the Coronavirus. They failed in making smart decisions to get the desired results. It now too late because we have lost many of our fellow residents due to the virus, and the country has incurred great costs.” He called for declaring an emergency in the Province and imposing stricter restrictions in Khuzestan Province.

Mrs. Maryam Rajavi is the President-elect of the National Council of Resistance of Iran’s (NCRI): Such great loss of lives could have been avoided. The reopening of all mosques and shopping centers is a criminal act by Khamenei and Rouhani; it will only send larger segments of the population to the altar of Coronavirus.