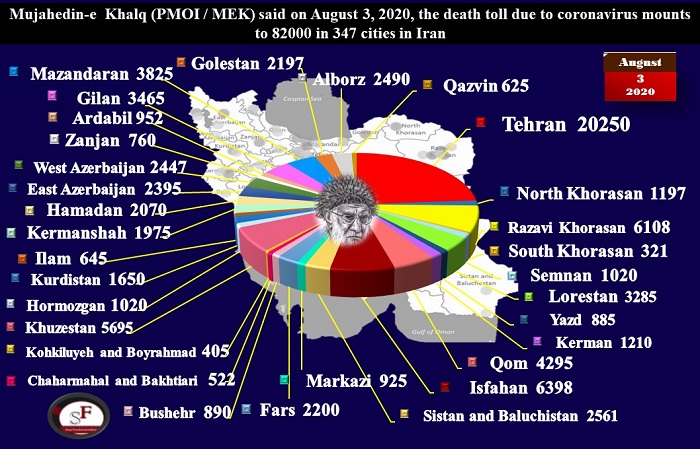 According to the People’s Mojahedin Organization of Iran (PMOI / MEK Iran) on Monday, August 3, 2020, the number of COVID-19 victims across Iran had reached more than 82,000.

While as a result of the criminal policies of Khamenei and Rouhani’s, Coronavirus is taking more and more victims among the poor and the deprived, Khamenei, after a long silence, brazenly absolved the regime of any responsibility and said, “Some people have seriously suffered from the Coronavirus outbreak and this must be compensated for.

More than 82,000 people have died of the novel #coronavirus in 347 cities checkered across all of Iran’s 31 provinces, according to the Iranian opposition PMOI/MEK.

(But) This must be compensated by the people. It is not possible to put all the burden on the government and quasi-governmental organs. They also have tasks that they have to undertake, but it is not enough and the people themselves can also help.” Quasi-governmental organs are foundations and institutions under Khamenei’s personal control, such as the Headquarters for the Execution of Imam Khomeini’s Order (EIKO), and the Mostazafan Foundation, and Astan-e Quds Razavi, where hundreds of billions of dollars of plundered property and capital of the Iranian people are accumulated. In this way, Khamenei is making it clear that, contrary to all expectations, he will not provide the impoverished people with any of these resources.

Iraj Harirchi, the Deputy Health Minister, told the main state TV, yesterday, “They allocated one billion dollars to us (for Coronavirus), we have until now received less than $300 million “

Is #Iran on the Verge of a Nationwide Rebellion?
An analysis by a think-tank of Khamenei’s faction
This report clearly demonstrates the regime’s increasing fear of a popular uprising due to its cover-up and failure in managing the #coronavirus outbreak.https://t.co/CmKGtW5MSC pic.twitter.com/F5KyW7R3s7

Setareh Sobh daily, August 1, wrote, “The society is frustrated, and at any moment there might be an uprising. In incidents in 2017 and 2019, around 80 to 100 cities rose up, whose names we had not even heard. Today, such a nationwide uprising is predictable… Today, 13 to 14 million Iranians live in slums. This means these people have nothing to lose. Officials must think of something; otherwise, it must regrettably be said the danger is predictable. If the fire is lit, extinguishing it will be very difficult.”

On another side, Etemad daily wrote on August 1, “Now, more than 100 dead are buried in Behesht-e Zahra Cemetery daily. If we consider the entire Tehran Province, the toll would probably be closer to 150. This is certainly not consistent with the Health Ministry’s official figure for the whole country, which stands at 200. The nationwide figure must be much higher… Islamshahr governor has said that 292 people have so far died in that city due to COVID-19. If we consider this proportion for the whole country, it becomes clear what the actual fatality figure is. And this is only the figure for the cities. To understand the reality of the Coronavirus, you do not need these types of calculations. Just pay a visit to hospitals to see them overflowing with patients.”

In Alborz, the vice president of the University of Medical Sciences told ISNA, August 1, “The number of Coronavirus patients hospitalized in the Province has increased significantly compared to the first outbreak. In the first outbreak, often, the elderly with underlying diseases were infected. In contrast, now, many of the hospital beds are occupied by youngsters and teenagers, which is a cause for concern.”

with more than 90 percent of the country’s population living in 26 provinces being in a state of red or on alert, according to the Health Ministry, August 1, Hassan Rouhani claimed, “Today the figures for the provinces were promising. About ten provinces were mentioned which were in difficult conditions in the previous weeks, but today they passed the peak of the disease.”