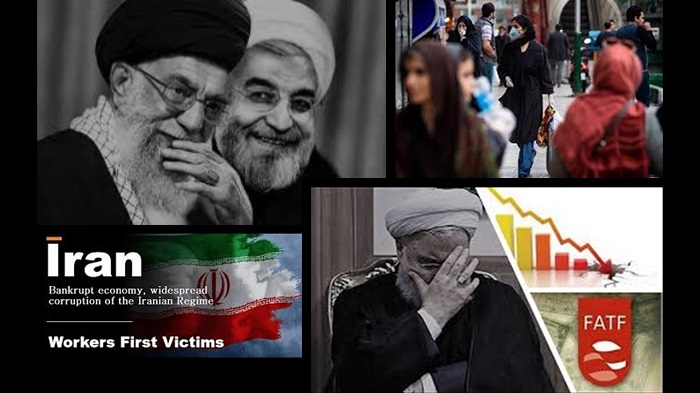 The coronavirus crisis in Iran has exposed the mismanagement in the mullahs’ rule more than ever. The regime is trying to portray a normalized situation and downplay the corona crisis. With the approval of a loan of one million tomans ($ 66) to people, the regime pretends it is helping the people like the western countries do.

The regime had declared that the one million tomans ($ 66) loan supposed to be given to the people at a 12% interest rate would be transformed into an interest-free loan. Rouhani said that the money would be deposited in people’s accounts around April 20, and the repayments will start in late June in installments of 350,000 rials per month, which will be deducted from the 450,000-rial monthly cash subsidy. Meanwhile, at the same time, the inflation rate is more than 40% and is rising day by day. Inflationary shock is already evident in the country’s economy, while at the same time government is facing a huge budget deficit.

Hassan Rouhani, the #Iranian President, claims that everything is getting back to normal and the country has the #coronavirus situation under control. Meanwhile, many in Rouhani’s government are saying the exact opposite.https://t.co/4wzbAkYhTN#Iran #MEK #COVID19 @USAdarFarsi

Parallel to Rouhani’s government’s position, Khamenei and the IRGC form another power, with the main aim to suppress the people and advance regional policies. They have enormous financial power. The Business Insider website wrote on May 14: “He has got the type of money to compete with a nation-state.  The only other person with personal access to so much cash is probably Putin,” said a financial intelligence analyst with a NATO member’s intelligence service. “Khamenei funds an independent parallel state that directly competes with Rouhani.”

Hundreds of billions of dollars of public wealth are in the hands of Khamenei, and no minimum help is provided to the people. The looted assets of the Iranian people staying in the hands of the IRGC and other significant economic institutions can cover the costs of workers, salary earners and the unemployed so that they can be safe from the coronavirus during quarantine time.

Mrs. Maryam Rajavi, the President-elect of the National Council of Resistance of Iran (NCRI), said on April 6:  “Fearing the eruption of another uprising, the regime’s supreme leader and the president have considered paying subsidies to some three million impoverished households, a flagrant mockery in the face of the devastating blow dealt with them in the coronavirus outbreak in Iran.”

Mohammad Mosaed, the reporter of the Daily Sharq, revealed in his telegram: “In the last five years, the government has allocated more than 3,750 billion tomans to the “service center of religious seminaries” to spend on “free health and pension insurance,” “housing construction” and other welfare services for the Mullahs.

The center also provides services such as low-cost housing with clerical housing projects in different provinces, good loan facilities, retail and discount services in different provinces, recreational accommodation complexes, and subsistence facilities to clerics across the country. To get a better picture, the budget for these services is three times the total budget of the last five years of the Environment Organization of Iran.

#Iran: Khamenei expresses fear of an uprising and MEK in meeting with Basiji students
The regime’s Supreme Leader expressed his fear over the surge in popular uprisings and protests and the increasing support for the #MEK and the Resistance Units.https://t.co/o4SsIzKGes

The government spends a lot of money on non-Iranian clerics who are, in fact, terrorist branches of the religious regime in other countries. Mohammad Mosaed wrote: “During the same period, the “Al-Mustafa International University (MIU)”, which is a training center for non-Iranian religious students, has received a budget of more than one thousand billion tomans and these figures are apart from the 3200 billion touman budget of “service center of religious seminaries.”

It is essential to know that in these calculations, the budget of Khorasan seminaries and women seminaries are not included. If they are, the direct budget of religious institutions related to seminaries will reach more than 10 thousand billion tomans in the last four years. These religious centers in Iran also receive an indirect budget through various contracts from various executives not easy to calculate accurately.

The table below shows that even Tehran’s Universities, which are the highest, receive a budget equivalent to one-fifth of the religious seminaries.

The budget of the religious seminaries alone is twice as much as the total loan the regime wanted to give to the Iranian people during the corona crisis.

The Daily Jahan Sanat wrote on May 12: “Unfortunately, the Coronavirus Task Force committee has abandoned the people in a vortex and is obsessed with the economic cycle. Seventy percent of the people do not trust the news and the statements of officials. The official statistics are so unrealistic that the world is amazed at the secrecy of the authorities. The announced number of deaths is declining day by day to portray a normal situation for people. In the cities, people infected with COVID-19 are no longer taken to the hospital.

At present, our government has adopted a procedure to ensure that all people are infected with the virus so that strong people can return to normal life, and the weaker ones fall victim to this policy. If the authorities stop using deception, perhaps people become more self-care, not that after all this time, Qom, Tehran, and Khuzestan will be exposed to a new coronavirus explosion. These days, people no longer trust what the authorities say. For years, there has been a filthy rift between the state and the nation. God knows when it will break open.”