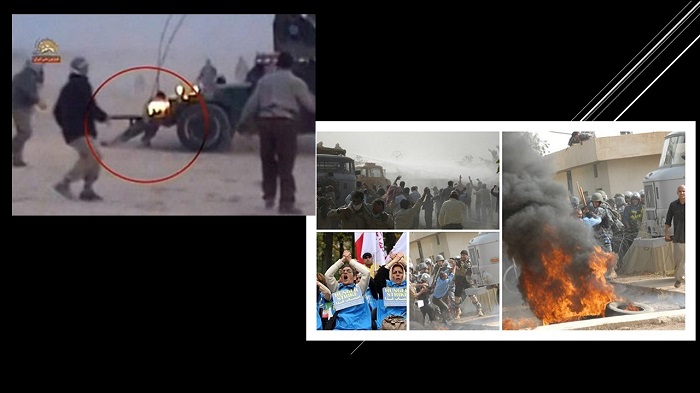 The Iranian resistance has commemorated the 11th anniversary of a brutal attack on the unarmed People’s Mojahedin Organization of Iran (PMOI / MEK Iran) members living at Camp Ashraf in Iraq.

The MEK Resistance Units in Iran put up posters in various cities with messages like “Commemorating the martyrs of the July 2009 massacre in Ashraf” and “We will continue your path”. They also chanted things like:

This was happening across the country, even though the regime was on full alert for protests, but the biggest activities happened in Tehran, Tabriz, Isfahan, Karaj, Zahedan, Mamulan, Gorgan, Astaneh-ye Ashrafiyeh, Ghaemshahr, Babolsar, Javanrud, Dezful, and Dorud where the Resistance Units targeted the regime’s suppressive centers.

They set fire to a Revolutionary Guards (IRGC) Basij base in Karaj, an IRGC banner in Astaneh-ye Ashrafiyeh, the office of the prayer imam of Khamenei in Mamulan, banners of dead terrorist Qassem Soleimani in Isfahan, Ghaemshahr, Babolsar, Javanrud and Dezful, and posters of regime founder Ruhollah Khomeini and Supreme Leader Ali Khamenei in several other cities.

For context, the Basij is the paramilitary wing of the terrorist-designated IRGC, both of which routinely suppress demonstrations by the people, while Friday prayer Imams spread regime propaganda. Soleimani played a major role in the 2009 attack on Camp Ashraf, as well as many other attacks on the MEK.

The attack During the July 28-29 attack in 2009, Iraqi Forces were sent by Iranian regime-backed Prime Minister Nouri al-Maliki to attack the camp, which resulted in 11 MEK members being murdered and 36 being abducted.

This was confirmed by Amnesty International, who wrote in their 2010 report on the human rights situation in Iraq: “Video footage showed Iraqi security forces deliberately driving military vehicles into crowds of protesting camp residents. The security forces also used live ammunition, apparently killing at least nine camp residents, and detained 36 others who they tortured.”

The hostages were eventually released following their 72-day hunger strike and a widespread international campaign.

The attack happened because the Iranian regime was scared of the nationwide uprisings they’d seen in Iran, following the rigged presidential elections, and hoped that by eliminating the MEK, they could quash any further uprising.