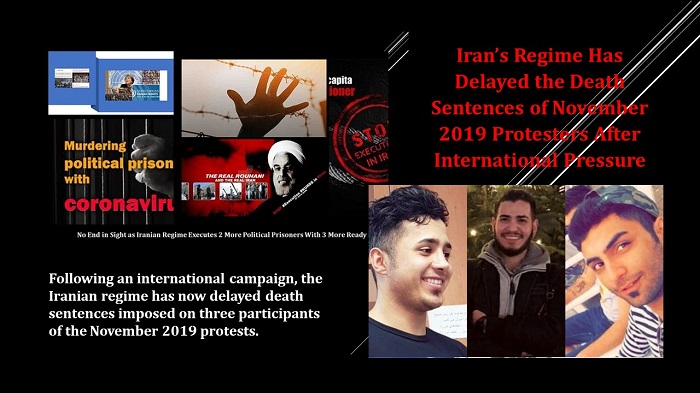 Following an international campaign, the Iranian regime has now delayed death sentences imposed on three participants of the November 2019 protests.

This is mainly due to opinions posted on social media where the Persian hashtag spread the words “#اعدام_نکنید #StopExecutionsInIran” This was viewed five million times and was supported by all sorts of people including foreign lawmakers, and international human rights advocates.

Now that this has taken place the international community should be keeping an eye on any future developments as this could be just a hoax to keep the limelight away from the tens of thousands of people internationally who are seeking a regime change. This is the time for western countries to drop their appeasement towards Iran’s terrorist activities and human rights abuses.

The regime’s “judiciary” in #Iran has ordered the death sentences of three young Iranians to be carried out.#StopExecutionsInIranhttps://t.co/0pS9SnEVjw

One of the worst things western governments have done in recent years was support Rouhani becoming president. His initial platform for change was releasing political prisoners, fewer media restrictions and better co-operation with neighboring countries whether friend or foe. These were promises made in 2017 but there has been little progress towards fulfilling these goals. This is seen clearly in the number of mass protests that have taken place in recent years and the number of protesters who have been either murdered or detained without a trial. These are all due to the actions of the Islamic Revolutionary Guard Corps in 2018, 2019, and 2020 where more than 1,500 protesters lost their lives.

Misinformation about death toll at protests

The regime wants to keep western critics at bay so, in June, the Iranian parliament’s National Security and Foreign Affairs Committee released an official so-called estimate of the death toll, stating that it was only 230. The (NCRI) and (PMOI / MEK Iran)’s 1,500 figure was confirmed by two key sources, the Reuters News agency, and the US State Department.

However, Western policymakers still seem unwilling to disrupt the status quo in Iranian relations. This in the long run will not be doing any favors for the Iranian people or the MEK resistance units who risk their lives by taking part in protests to demand freedom and democracy as an alternative to the current theocratic regime.

Join our special event on the need for justice over Iran’s #1988Massacre, a crime against humanity that has gone unpunished for 32 years.

We’ll be live streaming it as part of the #FreeIran2020 Global Summit. pic.twitter.com/sMozSpfOCJ