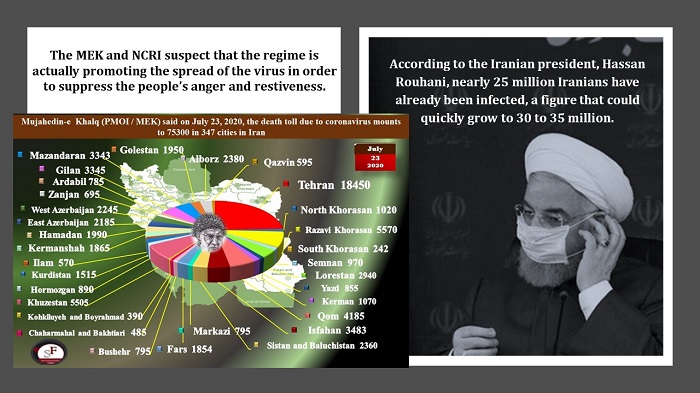 Covid-19 is surging across Iran and it has got to such a stage that the regime has been forced to admit how serious it is, despite spending weeks and months trying to downplay its severity.

According to the People’s Mojahedin Organization of Iran (PMOI / MEK Iran), the death toll reached 75,300 two days ago.

Over 75,300 people have died of the novel #coronavirus in 347 cities checkered across all of #Iran’s 31 provinces, according to reports tallied by the Iranian opposition PMOI/MEK as of Thursday afternoon local time, July 23.https://t.co/ZwKJ6oM3P5

The attempt to downplay the severity of the pandemic in Iran and the mismanagement risks growing public anger against the regime.

According to the Iranian president, Hassan Rouhani, nearly 25 million Iranians have already been infected, a figure that could quickly grow to 30 to 35 million.

Rouhani quoted a government Health Ministry reported when he said “to this day 25 million Iranians have contracted the novel coronavirus, and we need to assume 30 to 35 million are in danger of being infected by this virus. Over 200,000 persons were hospitalized. The number of people hospitalized in the future will be around twice the number we have witnessed in the past 150 days.”

The 25 million figure put forward by Rouhani on Saturday is nearly a third of the population and massively higher than the official number of #COVID19 cases. @HassanRouhanihttps://t.co/SZbEux8JBV

Rouhani and the Iranian regime are in fact far more worried about the explosion of anger and resentment against the regime’s bungling rather than trying to restrict the spread of the virus, which they think would harm economic interests.

“The simplest way is to shut down activities. The next day people will be protesting due to starvation, pressure, and problems,” he said. Rouhani is attempting to force people back to work, which is the main reason why the virus is now spreading so quickly.

The (PMOI / MEK Iran) and NCRI suspect that the regime is actually promoting the spread of the virus in order to suppress the people’s anger and restiveness.

An article in the state-run Mostaghel daily hit the nail on the head when it wrote the following on July 13th: “a savior was needed to divert people’s attention from the November and January [uprising] incidents. So, came the novel coronavirus.

The government used people’s fear of this invisible enemy to unleash the dragon among them. Long before its public announcement, COVID-19 had come or had been brought to Iran. But to defy Trump, they held events marking the 41st anniversary of the 1979 revolution. And to slap those dissatisfied with the approbative supervision, the Parliamentary elections were held as scheduled. Then they said: we just found about the virus’ existence, so people watch yourselves.”

The article went on to say: “While people are just trying to survive, this instrumental use of the COVID-19 to silence and control the anger of uncategorized starving people was so ruthlessly done that after six months, they not only have not achieved any success in controlling the virus but according to the official statistics, the situation is out of control.

Thousands of infections and hundreds of deaths per day confirm this. What other than this crisis could have diverted attention from people’s immersed anger and unfulfilled demands?”

The regime is so desperate to divert attention from its own mishandling of the pandemic that it even goes so far as blaming poor Iranians themselves for not adhering to rules about personal hygiene. The fact is that their measures forcing these people back to work are the main reason for the downturn in people’s health as the virus multiplies in crowds.

Even members of the Iranian Parliament are sounding the alarm about the r4egime’s strategy of blaming innocent citizens. “The officials have learned to blame the people for everything… The (government) officials must explain what actions they have taken and what they are doing now,” said a Gonbad Kavus member of Parliament, Amanghelich Shadmehr.

As the Mostaghel article went on to say: “This nation will not forget how it was abandoned during these bitter days.  This will affect the upcoming incidents. Because soon, people will come to their table for eating, and their despair of an empty table will lead them to protest on busy streets.

Then these wounded and deprived people will have nothing else left to lose. When their anger erupts, it will fight until the [regime’s] destruction, and you would see what you do not want to see.” After the oppression experienced in the November protests last year, it is unlikely that the regime would survive an outraged public.