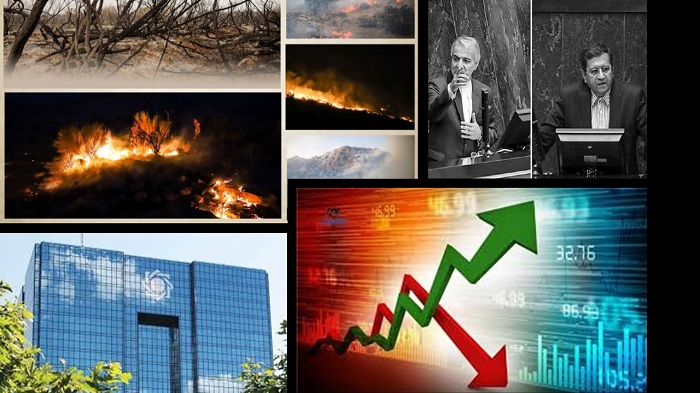 In years gone by, the Iranian regime would try to convince the people and the international community that everything is under control and that the crises it is experiencing are being managed. However, it is becoming more and more difficult for officials to keep up with these types of narrative because the situation of the regime is clear to see to all.

The head of the Central Bank of Iran Abdul Nasser Hemmati and the head of the government’s program and budget organization Mohammad Baqer Nobakht both admitted earlier this week that the Iranian regime is finding itself in a very difficult position because of the pressure it is being put under by the United States and its policies and sanctions, as well as the international isolation that has come as a result.

Hemmati said that the year 2019 has been the worst in the regime’s history and that many of Iran’s allies have been unable to help Iran. Nobakht said that it is very difficult for the country to move forward when it is under so much pressure, admitting that the country is now experiencing the result of sanctions.

And to add to the pressure on the country, there have been massive forest fires that are a result of the regime’s failure to act many years ago. The consequences of years of inaction are now showing their irreversible consequences.

Just south-west of Tehran, there have been major fires in the Chitgar forests. People close to the area have asked for help, but none has been given. It has also been reported that an area owned by the notorious Islamic Revolutionary Guard Corps (IRGC) has been burning near the city of Shahriar.

Furthermore, for more than a week, fires have been burning in the province of Kohgiluyeh & Boyer. Much of the area that has been burning is classified as a protected area, yet the authorities refuse to take any action. The fires can be seen from many miles away and there are serious concerns that it will spread and get closer to populated areas.

The forests of Zagros, Dashtestan &Gachsaran, Khaeez forests in Kohgiluyeh, Charmahal-o Bakhtiari &Khuzestan, the farmlands of Ilam, Paveh, Semnan, &some parks in Ahvaz &Tehran are burning in fire. But the mullahs’ anti-Iranian regime takes no action, blaming people instead #Iran pic.twitter.com/SEpYNIFpVB

On Sunday 31st March, a member of the Iranian Parliament admitted that the spread of forest fires is getting even more concerning because of the lack of attention that has been paid to the environmental situation. He said that there has been irreparable damage in the province Kohgiluyeh & Boyer – an area he describes as a “national treasure” – and that locals are fighting to preserve it. He said: “Locals with their bare hands are braving all odds to confront the fires that are destroying trees and wildlife, killing innocent animals in the Khaeiz mountains. It is necessary for certain [officials] to wake up and take some action.”

Many parts of the country that are affected by forest fires do not have necessary or adequate firefighting resources. For many years, environmental activists have been drawing attention to the problem, yet nothing is done to protect the forests. Furthermore, the Iranian regime has taken action to silence environmental activists.

Maryam Rajavi is the President-elect of the National Council of Resistance of Iran’s (NCRI):

The clerical regime, however, has taken no serious action to curb and put off the fire, leaving local residents defenseless in the face of the disaster.

The forests of Zagros, Dashtestan &Gachsaran, Khaeez forests in Kohgiluyeh, Charmahal-o Bakhtiari &Khuzestan, the farmlands of Ilam, Paveh, Semnan, &some parks in Ahvaz &Tehran are burning in fire. But the mullahs’ anti-Iranian regime takes no action, blaming people instead.