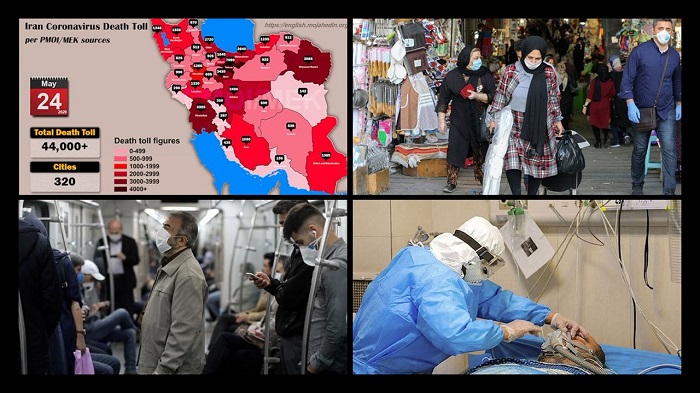 Viruses don’t care how much money you have, where you live, or the religion you believe in. Covid-19, the disease of the novel coronavirus, can only be beaten with the best health and scientific knowledge and strong and determined action by governments.

Sadly, the mullahs’ regime has abdicated its responsibility and the result is a resurgence of the death and socio-economic destruction caused by the epidemic across Iran. It has been left to individual provincial governments to declare red zones in regional hotspots and deal with the resurgence of disease without any help from the Iranian regime.

Conditions have also been deteriorating in the city of Isfahan, central Iran. “The city of Isfahan is designated as a red area and the number of people testing positive outside of hospitals is increasing.

More than 44,000 people have died of the novel #coronavirus in 320 cities checkered across all of #Iran‘s 31 provinces, according to the Iranian opposition PMOI/MEK. pic.twitter.com/IoOjcqW9DD

Ali Ehsanpour, the spokesperson of the Ahvaz Medical Sciences University in Khuzestan Province, said that alarm bells were ringing in the province as over 840 people remain hospitalized. The fact that Eid al-Fitr, the end of Ramadhan, is just around the corner, with the possibility that transmission could increase during celebrations, has prompted the Khuzestan authorities to close the borders to private vehicles, including sedans, until further notice.

“The city of Chabahar is now designated a red area. The number of positive COVID-19 cases has increased 15-fold in comparison to two months ago,” the deputy governor of Sistan & Baluchistan Province, Rahmdel Bameri, said. All shopping centers and the free trade zone of Chabahar city have been closed down because of the epidemic.

Mehdishahr, a city in Semnan province to the east of Tehran, has gone from yellow to the red zone as the number of infections has soared, according to the city’s governor.

Unfortunately, #Iran has 19 million “slum dwellers”. This affects the poor the most because if they don’t go back to work they face starvation, but they are also more likely to die from contracting #COVIDー19.https://t.co/EYTD6Ghme6#MEK #coronavirus @USAdarFarsi pic.twitter.com/uCnybw0HLU

The main Iranian opposition, the People’s Mojahedin Organization of Iran (PMOI/MEK), has estimated through its contacts in the country that over 44,000 Iranians have died, a figure far higher than the official figure provided to the World Health Organization (WHO) by the regime. The figures provided by the MEK show that more than 220 patients have died from Covid-19 in Tehran’s Labafinezhad Hospital alone. More than 7,100 people have died in the nations’ capital, the worst hit, followed by nearly 3,325 in Khuzestan, over 1,556 in East Azerbaijan, 1,330 in Lorestan, 600 in Markazi, 500 in Kerman and nearly 290 in Kohgiluyeh & Boyer Ahmed.

Conditions have also been deteriorating in the city of Isfahan, central Iran. “The city of Isfahan is designated as a red area and the number of people testing positive outside of hospitals is increasing.