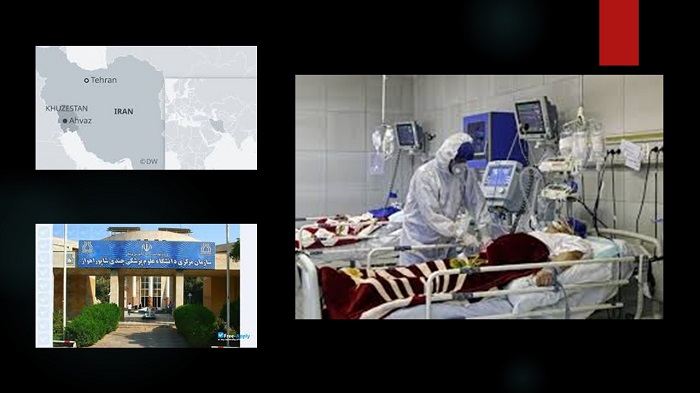 The number of people infected with the coronavirus in Iran’s south-western province of Khuzestan has worried people.

Mohammad Alavi, head of the province’s health center and deputy director of health at Ahvaz Jundi Shahpour University of Medical Sciences, said: “Statistics that are regularly announced are increasing. There are statistics that are almost high in Khuzestan province. This information and the available statistics indicate two issues. The first problem is that the cases of the disease in Khuzestan province have really exceeded our expectations.

Razi Hospital Chief in Ahvaz: The situation is so dire that one of every two patients must be hospitalized

More than 39,800 people have died of the novel #coronavirus in 314 cities checkered across all of #Iran‘s 31 provinces, according to the Iranian opposition PMOI/MEK. pic.twitter.com/BG9TI59Y6S

The state control daily, Entekhab, quoting the head of Razi Hospital in Ahvaz, wrote, “Coronavirus is expanding extensively in Khuzestan; the situation is so bad that one out of two patients must be hospitalized. About 60 patients with respiratory distress are in the ICU, and the condition of these patients is extremely bad … This disease is horrific and savage … We did not have so many patients before, but over the past few days, we have had many patients. The situation in Khuzestan is becoming critical.”

The situation in other provinces is also dire. The official news agency IRNA quoted the deputy governor in North Khorasan, as saying, “Our province is still in a red situation in terms of the spread of the Coronavirus.” Another state-run daily, Aftab News quoted the deputy director of the University of Medical Sciences, as saying, “The current situation of the Province in terms of the Coronavirus spread is six times worse than what it was on March, 2020, and most of the cases occurred in the last few days.”

The state-run Jahan Sanat newspaper warned today, “If the government does not reconsider its policies, people are going to erupt like volcanoes.” Another state-run daily, Arman Melli, wrote, “We all need to be vigilant not to be caught off guard the army of the hungry rebelling.”

Forty years of the mullahs’ rule has dismantled the country’s medical, health and welfare foundations to a large extent, leaving our country and society unable to defend against pandemics. #COVID19 #Iran pic.twitter.com/GXHtakq6ha

Mrs. Maryam Rajavi, the President-elect of the National Council of Resistance of Iran (NCRI), reacted to the consequences of compelling the helpless people back to work, and to the intensifying crisis in Khuzestan. She said the situation in the Province was the by-product of the criminal policies of Khamenei and Rouhani. They have refused to pay the salaries of the wage earners, even temporarily, from the nation’s wealth, which they and the IRGC control. Instead, they have sent the people to the altar of Coronavirus without providing them with medical support and necessities.

Mrs. Rajavi added: Again, the people, especially the selfless youths, must take it upon themselves to rush to help the ill and needy while observing medical guidelines.