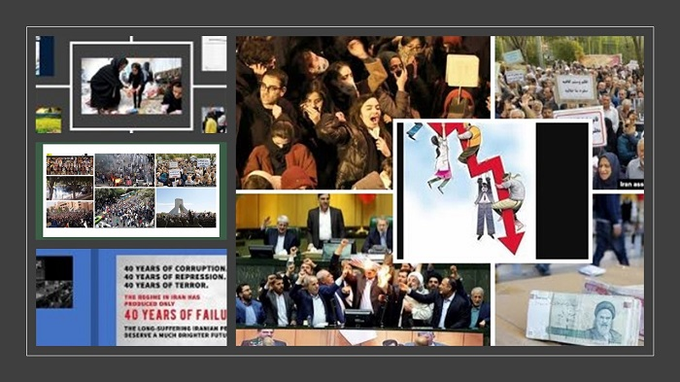 For the past few years, the Iranian regime has been dealing with continual strikes, protests, anti-government demonstrations, and several major uprisings. If anything has become clear, it is that the people of Iran are deeply unhappy with the rule of the mullahs that has made them poorer and extremely vulnerable.

The country’s economy is in tatters and the social problems are endless. More and more people are falling into the extreme poverty category and purchasing power is decreasing all the time.

The situation in the country is explosive. And the regime is very well aware of this. It knows that one little spark is going to provoke another nationwide uprising. With every uprising that the regime manages to survive, it becomes increasingly weaker.

Society is well and truly simmering with discontent. Over the past few years, there have been numerous strikes, protests, anti-government demonstrations, and several significant uprisings. https://t.co/uXP35bGUxb#Iran #MEK #COVID19 @USAdarFarsi pic.twitter.com/DfKAL9FZmh

Mujahedin-e Khalq (PMOI/MEK Iran) times and again stated that the regime is refusing to listen to the people of Iran who are struggling in many ways and it is right to worry about further dissent.

Institutionalized corruption is partly to blame. As are the regime’s policies of exporting terrorism and extremism. The regime’s interference in the affairs of other countries and its suppression of freedom at home are also to blame. Its crimes against humanity and its continual and consistent mistreatment of dissidents and political opponents have contributed to the major discontent in Iran. As have the regime’s decades of lies and deceptions.

Society in Iran has been described as being in a powder keg state and this description is certainly accurate. The regime is aware that the nation’s wealth has been plundered and state media has been reporting on the situations that organizations are finding themselves in.

The President of the Iranian Food Industry Associations Mohammad-Reza Mortazavi said during an interview recently that workers should be seeing an increase in their salaries every year, but the reality of the situation is that “the current financial oligarchy takes fifty percent of workers’ wages, leaving them nothing”. He also said later in the interview that “with just a little endeavor” the number of road accidents and deaths could be significantly decreased. He acknowledged that “some people” have stolen “a lot of wealth”.

Over 47,500 people have died of the novel #coronavirus in 323 cities checkered across all of #Iran’s 31 provinces, according to reports tallied by the Iranian opposition PMOI/MEK as of Thursday afternoon local time, May 28.https://t.co/M8VkMhBG4h

Furthermore, in an explicit warning to the Iranian regime, Mortazavi said that middle-class society has become “engulfed” with “social hatred” and that is a hindrance that will soon become “resentment”. He recalled the beginning of the revolution all those years ago and said that it is clear society is heading in the same direction.

“I remember the first days of the revolution. Some people were running into houses, confiscating those houses (…) I see that day and it is crystal clear to me, that those days are coming back. As someone who knows and looks at society, I see that this hatred is growing and will explode.”

The people are going to be the force behind the regime’s collapse. This collapse is inevitable. Nothing that the regime can do will ever bring the people to trusting the regime. It is corrupt to the core and decades of widespread corruption and malign policies can never be reversed or rectified. The people deserve leadership that will not put them in harm’s way.