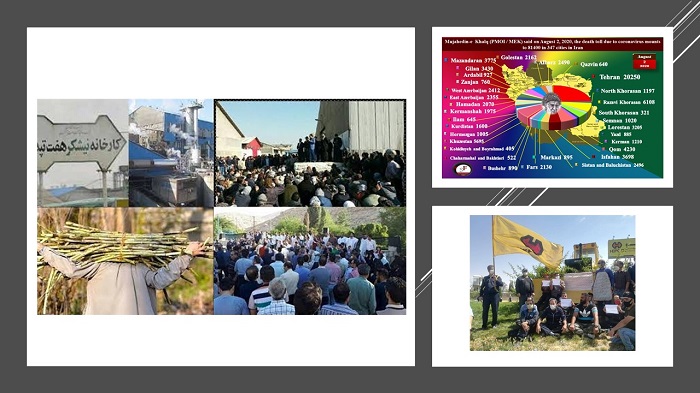 Warnings are circulating within the corridors of power in Iran about the possibility of an explosive uprising due to the regime’s mismanagement of the economy and the Covid-19 epidemic, which has taken the lives of at least 81,000 according to MEK (Mujahedin-e Khalq, AKA Peoples Mojahedin Organization of Iran-PMOI) sources inside Iran.

Amanullah Gharayi Moghadam, an Iranian sociologist, in an interview with the state-run daily, Setareh Sobh, expressed his opinion about the current situation in Iran: “for years, I’ve been speaking as the ideation room of the police. I have worked for many years as a sociologist in the Judiciary… so I’m not bluffing. My remarks are based on scientific theory. The youths are fed up. They are waiting. It was just two weeks ago when social media users tweeted 12 million times the hashtag ‘do not execute’ in protest to death sentences for three youths arrested during the November 2019 events (Iran protests). We must think of our youths. We must do something, otherwise, unfortunately, the danger is predicted. If this match is lit, putting down the fire will be very difficult.”

Moghadam went on to say: “60 million of the country’s 80 million population need assistance for the basic livelihoods, and this figure is before the coronavirus crisis. At this point, we have 7 million unemployed youths… High prices and inflation are astronomical. As a result, we must wait for the social protests. What I mean by this is what happened in December 2017 and November 2019. If the establishment fails to handle people’s despair regarding economic problems, we must wait for the consequences and other events… the protests of the workers of Haft-Tappeh Sugar Cane Factory and the Heavy Equipment Production Company (HEPCO) is the result of an upset and worried society. This shows that danger is lying in ambush.”

“Another threat… are the southern and deprived city movements… society is upset and any moment there is a threat of revolt of the society… revolt means movement from within the society, with riots within. During the events of December 2017 and November 2019, about 80 to 100 cities whose names were heard for the first time revolted. Also, today such social and nationwide revolts are predicted. Today we have about 13-14 million who live on the outskirts of cities and have nothing to lose. The previous era is over, and a part of the population is starving today.”

The background to the crisis in Iran

In December 2017, a wave of anti-government protests took place across Iran. The trigger was the rising inflation rate in Iran and the effect this had on the poorest. The protests persisted through January 2018 before the scale of repression forced the protesters to scale back their protests. A series of strikes continued throughout 2018.

Huge protests then took place again in November 2019. The trigger this time was the steep rise in gasoline prices. A bloody crackdown ensued with an estimated 1,500 protesters shot and 12,000 imprisoned in dire conditions.

The National Council of Resistance (NCRI) has pursued the aim of having the perpetrators of the November massacre investigated and tried because of their crimes against humanity. According to the NCRI, the leaders of the Iranian regime must be held accountable. The names of 765 of those who were killed by regime forces during the protests have been sent to international authorities by the MEK to demonstrate the inhumanity of the Iranian regime.

According to information obtained by the Iranian opposition PMOI/MEK, during the first few days of the uprising, security forces killed at least 1,500 protesters and made more than 12,000 arrests.#Iran#HumanRightshttps://t.co/THtBwLQjkX

The protests have continued with many people wishing to express their contempt and hatred for the Iranian regime. After a Ukrainian commercial airliner was shot down by the IRGC in January this year. This sparked a new range of protests across Iran.