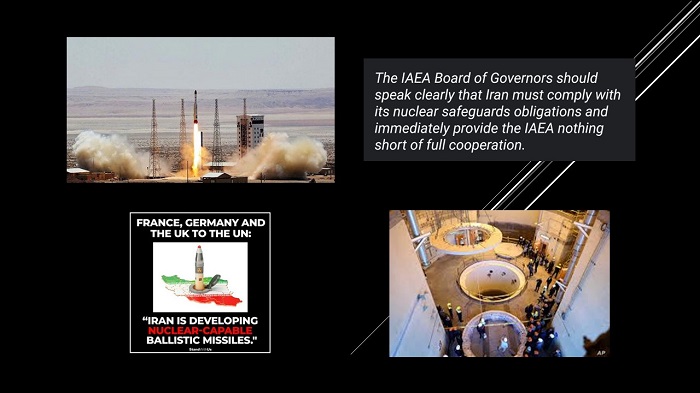 The National Council of Resistance of Iran (NCRI) said that it is “imperative” that the six UN Security Council resolutions on Iranian nuclear activity be reimposed, following reports from the international nuclear watchdog that the mullahs’ regime has repeatedly breached the Nuclear Non-Proliferation Treaty (NPT) and the Additional Protocol, as well as violating the Joint Comprehensive Plan of Action (JCPOA).

The two reports by the Director-General of the International Atomic Energy Agency (IAEA) to the IAEA Board of Governors reveal that the IAEA has several questions over “possible undeclared nuclear material and nuclear-related activities at three locations in Iran”.

#Iran’s Regime Nuclear Ambition and IAEA Report
The #IAEA should refer the regime to the U.N. Security Council, triggering a restoration of all U.N. sanctionshttps://t.co/D4BY8GZAsV

The summary report read: “The Agency notes with serious concern that, for over four months, Iran has denied access to the Agency, under Article 4.b.(i) and Article 5.c. of the Additional Protocol, to two locations and, for almost a year, has not engaged in substantive discussions to clarify Agency questions related to possible undeclared nuclear material and nuclear-related activities in Iran. This is adversely affecting the Agency’s ability to clarify and resolve the questions and thereby to provide credible assurance of the absence of undeclared nuclear material and activities at these locations in Iran.”

While the second report regarding Iran’s adherence to its commitments under UN Security Council Resolution 2231 and the JCPOA says that the regime’s total stockpile of low-enriched uranium amounted to 1,571.6 kilograms on May 20 and that they had previously confirmed that Iran was enriching uranium up to 4.5%. The JCPOA only allows for enrichment of 3.67% and storage of 202.8 kilograms.

.@NCRIUS panel: @OlliHeinonen: Documents seized from #Iran, shows regime may have undeclared nuke materials. A decision must be made to go hard on the regime because of Tehran’s non-compliance. Since 2002, the regime has never been in compliance with nuke safeguards. #Iranian pic.twitter.com/PBX5JcOOZG

Dr. Olli Heinonen, former deputy director-general of the IAEA, and head of its Department of Safeguards, at June 3, 2020 panel organized by the National Council of Resistance of Iran, U.S. Representative Office (NCRI-US) on the growing threat from Iran’s regime said:

The reports of the IAEA, in March, showed that Iran is in breach of its obligations under the JCPOA, as we know, when the U.S. withdrew two years ago, Iran said a year ago that it will not honor any or all its commitments and has gradually boosted its uranium enrichment capabilities. The March report showed that Iran has not only increased the number of centrifuges but produced about one ton of low enriched uranium, enriched up to 4.5 percent. This amount is actually enough to make one nuclear device if Iran wants to enrich it further to the level of 90 percent. The upcoming report, after two to three months of work, will show most likely that Iran has now a stock of low enriched uranium, which is sufficient for two to three nuclear weapons. At the same time, Iran has installed additional centrifuges and is testing new models of centrifuges.

#Iran: NCRI-US held a virtual conference, attended by renowned American politicians, entitled: “The Growing Threat from Iran’s Regime.”
The panelists focused on the #Iranian regime and the threat it poses to the international community.https://t.co/c5aoclEqaT

The NCRI said these reports prove that Iran has not abandoned its plans to build a nuclear bomb, something that NCRI President Maryam Rajavi predicted from the beginning.

She said: “Circumventing six Security Council resolutions would not prevent the mullahs’ deception and the quest to obtain an atomic bomb.”

On January 6 of this year, Rajavi described the regime’s decision not to abide by “restrictions in the number of centrifuges, the capacity, percent, and level of enriched uranium and research and development”, in its nuclear program as the mullahs effectively pulling out of the deal.

She then said it was imperative that the trigger mechanism to reinstate the six United Nations Security Council resolutions against the regime be activated as a matter of urgency, noting that the mullahs have used all of the benefits and concessions from the JCPOA to increase terrorism,  warmongering, and suppression.