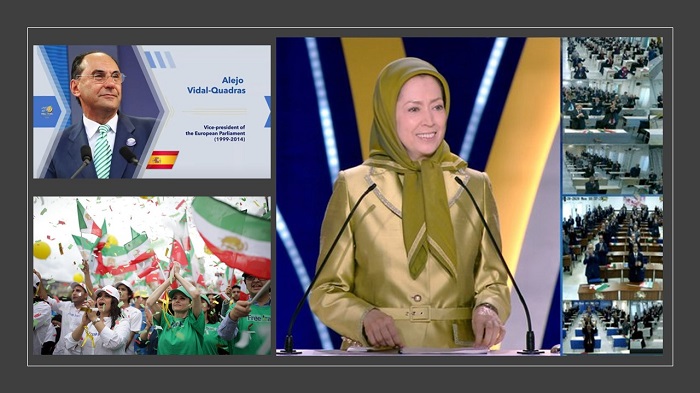 Many distinguished guests including politicians, religious leaders, human rights activists, and so on, participated in the annual Free Iran Gathering. This year the gathering was a little different because it was held online because of the Coronavirus pandemic, but this did not affect the caliber of speakers that participated.

Dr. Alejo Vidal-Quadras, a professor of atomic and nuclear physics and former vice-president of the European Parliament from 1999 to 2014, was one such speaker. Dr. Vidal-Quadras, who is also President of the International Committee in Search of Justice (ISJ), spoke about holding the regime accountable for its crimes and the importance of supporting the Iranian Resistance that is working towards freedom, democracy and the respect of human rights in Iran.

In a recent article, Dr. Vidal-Quadras spoke about the importance of a viable alternative to the Iranian regime being in place before the regime collapses. This alternative, he maintains, is the National Council of Resistance of Iran (NCRI). He, like many of the other speakers at the Free Iran Global Summit, voiced their support for the NCRI that is being led by President-elect Mrs. Maryam Rajavi.

Highlighting the success of the recent summit, Dr. Vidal-Quadras pointed out that there were people from 30,000 individual locations across 100 countries participating in the event, including former Prime Ministers, religious leaders, parliamentarians, former administration officials, and so on.

The summit also heard from activists inside Iran through recorded videos, showing the work of the MEK’s “Resistance Units”. Dr. Vidal-Quadras said that the event was “historic” and the NCRI’s ability to organize it and hold it amid a worldwide pandemic is truly a testimony to its viability. He said that the NCRI had the “ability to organize and manage an unprecedented event which no one, even the governments, has attempted to do”. He said: “This unprecedented event once again demonstrated that the NCRI is the best and most viable alternative to the Iranian regime.”

Former U.S. Senator Joseph Lieberman paid tribute to the “competence”, “persistence”, and “determination” of the NCRI. Former US Secretary of Homeland Security Tom Ridge said that Iran could be a very different and positive place if the NCRI was able to bring its “ingenuity and that creativity and that commitment to excellence and that positive reach and positive connection globally” to Iran.

Former Minister of Human Rights in France, Rama Yade, said that the NCRI “proves the technical logistical and technological capacity of a structure that knows how discipline and method are necessary conditions for the mobilization and success of its old dream for a free and democratic Iran”.

Many of the speakers at the event highlighted that the regime is indicating just how viable the NCRI is as an alternative through its efforts to discredit it. And the Iranian rightly does see the NCRI as a major threat.

Dr. Vidal-Quadras ended his article by saying that “the Free Iran Global Summit represents an opportunity to show that there is an organized movement, and alternative to replace the country’s theocratic dictatorship with a truly democratic system of government”.