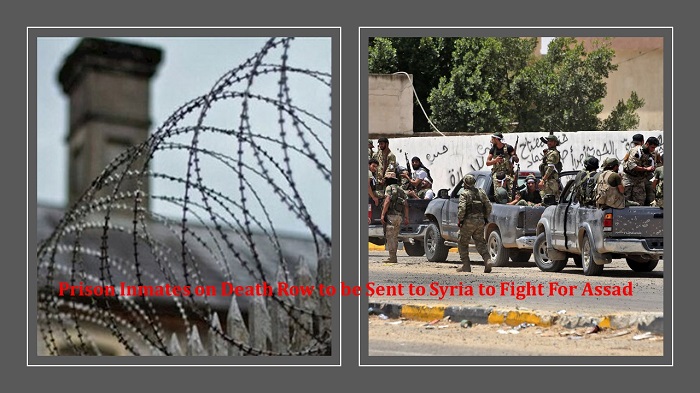 The Iranian regime is looking to recruit more doomed people to fight on the side of Bashar Assad in Syria. On July 27th a report came in that a mysterious delegation in “high-quality clothing” was seen visiting the Karaj Central Prison west of Tehran.

They were in search of those who have death sentences and are prepared to take a chance on being sent to fight with Assad. The carrot being dangled in front of them is that if they return alive from their stint in Syria, they won’t have to return to prison.

The “fight for freedom” deal is not new. Many former inmates are aware that prisoners on death row have been enticed into fighting in proxy wars on the spurious condition that they will be free when they get back.

Some of these former inmates say that in fact the prize of freedom is rarely experienced in reality. One former prisoner, who wasn’t in fact on a death sentence, said “it was suggested that I go and fight in Syria.

We were promised to go to countries under Iran’s sphere of influence, such as Syria, and in return, we would be released from prison. Of course, if we were to survive. Some inmates who were sentenced to death or had long prison terms agreed to know they had no other choice.

If anyone refuses to be dispatched to Syria, they will be executed or face death in prison. If they do agree, maybe they have a chance to be relieved of execution,”

This ex-prisoner said that returnees will just be sent to another war to fight in. Even if they are allowed to stay in Iran, they cannot contact their family and are usually sent to somewhere far away from their original home. He mentioned someone called Rauf, whose family was told he had been executed. In fact, he was sent to Syria to fight Assad’s war.