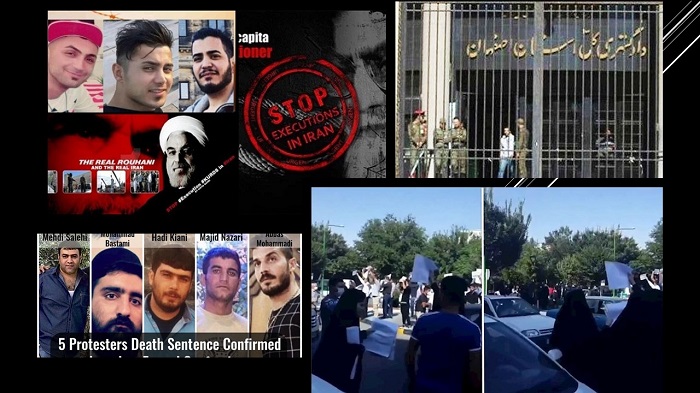 Five young men who were arrested following the December 2017 / January 2018 protests face possible secret execution according to their families, who are attending daily rallies outside the Isfahan judiciary building to express their concern.

The five inmates of Isfahan Central Prison have been denied phone contact with their families. Talks between the family members and regime officials have led the families to suspect that the five will be executed in secret.

A report issued in Iran says “Communication between Mehdi Salehi Ghale-Shahrokhi, Mohammad Bastami, Majid Nazar Kandari, Hadi Kiani and Abbas Mohammadi and their family members have been cut off and some officials have made remarks to these family members that have made them believe they may be executed in the coming hours. Furthermore, these family members are becoming increasingly concerned because additional security units have been dispatched to the town of Nikbakht.”

On July 29th, family and friends of the five prisoners rallied in a peaceful protest outside the Isfahan Judiciary building. They were told in no uncertain terms that such a protest would be met with reprisals. Batons and other weapons were eventually used by security forces against the rally participants in a vicious attempt to punish them for attending.

At the court hearing, the five young men said that confessions were forced out of them after being tortured. Although unconfirmed, it has been reported that each young man was convicted of two charges that could lead to the death penalty. One is the crime of “waging war against God” while the other was baghi, which translated means the crime of using arms in an attack against the government.

The protesters had already been sentenced to death by the Isfahan Revolutionary Court in February 2020, according to one of the lawyers representing the five men.

The actual offenses alleged to have been committed by these five men, according to the Isfahan Revolutionary Court were “baghi through effective efforts and activities to advance rioters’ objectives, moharebeh through the use of firearms and the intention to disrupt community security and shoot at officers,” and “corruption on earth by disrupting public security and leading rioters to disrupt public order and security and disturb public opinion.”

The charges laid were a month after similar charges of ‘corruption on earth’ against eight other men in the Isfahan Revolutionary Court.

The charges against these five young men come soon after other death sentences imposed on three other young men in Tehran. These men were accused of participating in protests last November. These executions have been delayed pending appeals from the men.

The mullahs’ regime uses violence against anyone who voices opposition to its control in Iran. Beatings, murder, and imprisonment are typical methods of state-sanctioned oppression.

I urge the international community, especially the United Nations Secretary-General and other #HumanRights organizations to intervene immediately to stop the executions, secure the release of the prisoners, and prevent a major humanitarian catastrophe in prisons #Iran pic.twitter.com/6KGQDzPQm0

The president-elect of the National Council of Resistance of Iran (NCRI), Maryam Rajavi, has called on the U.N.’s relevant organizations to take action against the Iranian regime for continuing to use torture, executions and arbitrary arrest within Iran. She said “by these executions, the clerical regime seeks to terrorize the people of Iran in the face of their protests. At the same time, they seek to boost the spirit of their mercenary agents and recruit their families for espionage and suppression of the public.”

Supreme Leader Ali Khamenei spoke to the young men about the PMOI #MEK #Iran and his concerns about the opposition group. He warned that the regime needs to be “careful about the enemy recruiting members of our young society”.https://t.co/Ez238fMSxZ#Iranian @USAdarFarsi pic.twitter.com/gUpnkHwzAZ

Ali Khamenei is getting worried about the potentially explosive social situation in Iran as he thinks that MEK resistance forces are “waiting to use any opportunity.” He says that the MEK Iran is using any sign of internal dissent to portray the mullah’s regime as in danger of collapse. “Be careful of those who take advantage of these protests to pursue their objectives against the state,” he said.

The People’s Mojahedin Organization of Iran (PMOI / MEK Iran) is serving as a beacon for freedom, representing a rebellious and defiant generation who were key players in the December 2017 and November 2019 uprisings.