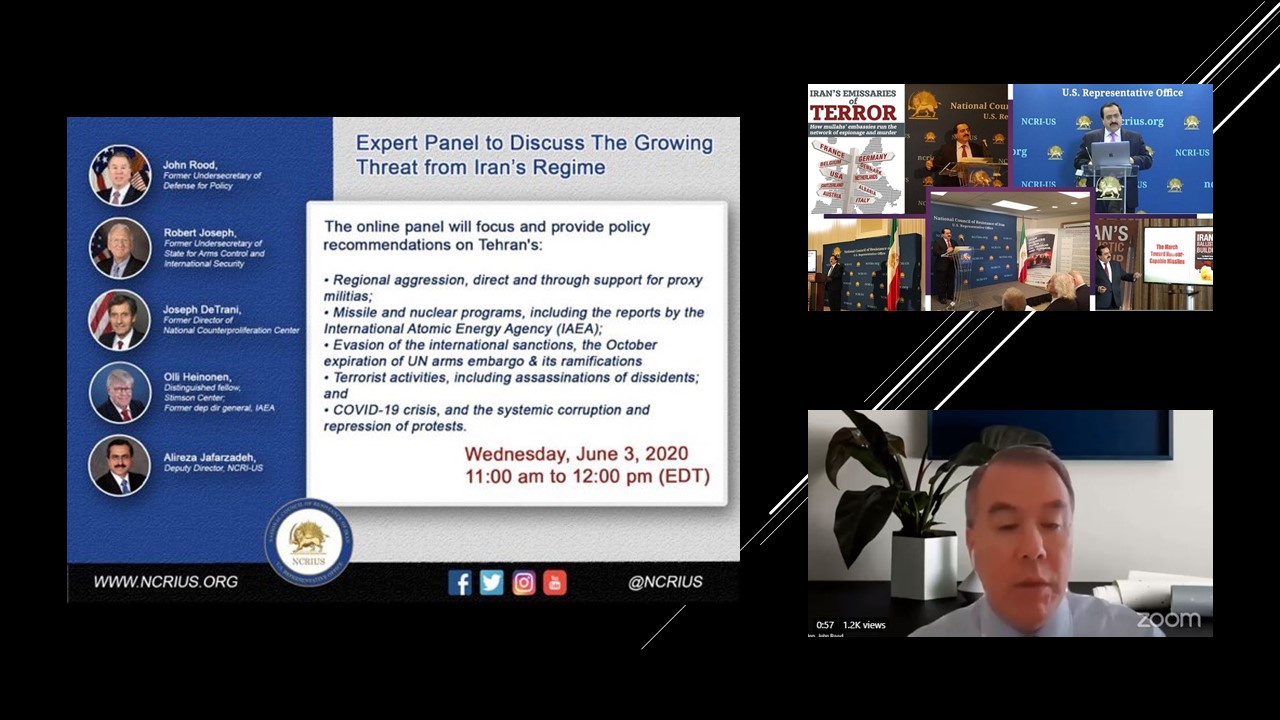 Transcript of remarks by John Rood the former U.S. undersecretary of defense for policy on June 3, 2020, addressing the meeting, entitled, the “Growing Threat from Iran’s Regime, Snapback of UN Sanctions”.

The meeting was organized by the National Council of Resistance of Iran, U.S. Representative Office (NCRI-US) on June 3, 2020.

Thank you, Alireza for the invitation to speak on such a distinguished panel on the threat posed by Iran.

Today, the Iranian regime poses the greatest threat to the United States and our allies in the Middle East.

And today, the Iranian regime remains the world’s foremost state-sponsor of terrorism.

The ideology promoted by Ayatollah Khomeini who came to power in the 1979 revolution envisioned spreading this revolution across the region and the Supreme Leader today remains committed to this vision.

Consistent with this vision, over the past decade, Iran has grown its influence across an arc stretching from Yemen to the Strait of Hormuz and the Gulf, through Iraq, Syria, Lebanon, to the Palestinian territories.

The regime has backed proxy militias throughout the Middle East with the goal of advancing Iranian regime style Islamism.

This combination of a desire to undermine governments in the region spread the 1979 revolution, and to provide and utilize lethal conventional capabilities and proxy forces poses a persistent threat.

Since the Arab Spring and the start of the Syrian civil war, the Iranian regime has become increasingly involved in regional conflicts— particularly in Syria, Iraq, and Yemen.

.@NCRIUS Panel: Undersecretary of Defense John Rood, speaking about the threat of #Iran regime, use of proxy militias, Qods force using lethal action, and how to deter #Iranian regime in the region.
Elimination of Soleimani was extremely critical important for deterrence pic.twitter.com/xQKx4gOY5c

Iran has committed extensive resources and deployed military forces to support key partners in these struggles, adapting its longstanding model of warfare in which it has supported terrorist and proxy militant groups like Hizbollah to also include the more conventional application of military power and involvement of the IRGC forces directly.

In Syria, since the early days of the civil war, Iran has been involved in propping up the Asad regime to include providing arms, training, advisers, and combat personnel to support the Syrian regime.

Throughout the conflict in which over 500,000 civilians have been killed, Iranian forces and support has played a key role in this appallingly brutal conflict that has included the use of chemical weapons by Asad against his own people.

In Iraq, one of the Iranian regime’s strongest levers of influence is through the many Shia militias it backs. Iran has provided financial backing for some of these groups for decades. The Badr Organization, Asaib Ahl al-Haq, and Kataib Hizballah have long served as reliable partners for Tehran, including conducting attacks on U.S. military personnel in Iraq from 2003 to 2011 using Iranian-provided munitions. [2]

Using Iranian-provided weapons, these groups were responsible for over 600 U.S. personnel killed in Iraq between 2003 and 2011.[3]

I visited Iraq last year to meet with the Prime Minister, Defense Minister, and the leaders of the Kurdistan Regional Government.  The corrosive impact of this Iranian malign influence was apparent.

Throughout Iraq, these Shia Militia Groups challenged the authority of the government and suppressed the ability of the Iraqi people to determine their own future.  The streets in Baghdad and other major cities swelled with protestors calling for an independent Iraq with the ability to determine its own future without malign influence from Iran.

Elsewhere in the region, Iran maintains strong ties to the terrorist group Hizballah in Lebanon—its most significant and oldest non-state partner and a core member of Tehran’s “Axis of Resistance.”

The Iranian regime also provides support to Shia militants in Bahrain and the Taliban in Afghanistan. [2]

In Yemen, Iran has supported the Huthi rebels with financial assistance, weapons, military training, and operational advice.  Iran provides a wide range of support—including advisers, training, and lethal aid—to the Huthis to support their operations against the Saudi-led coalition, including the UAE in the Yemen conflict.

The Iranian Revolutionary Guard Corps Quds Force, the IRGC’s external operations element, is Iran’s primary conduit of support and guidance to these nonstate partners and proxies.

At the same time, modern conventional capabilities will be open to Iran for the first time since the revolution, as the UN arms embargo is scheduled to end by October 2020.

These more modern arms could well fuel increased adventurism by the regime as it continues to try to spread its malign influence.

As in so many areas, the regime is not on the same page as the Iranian people who do not support the regime trying to spread this malign influence across the region.  As Eric Edelman and Ray Takeyh point out in their article on Iran in the current version of Foreign Affairs,

“Last November, a sudden increase in fuel prices provoked riots in hundreds of cities; some 1,500 people died at the hands of the police and security forces. This time, the demonstrators did not just call for the death of their leaders; they also decried Iran’s involvement in conflicts elsewhere. (“Not Gaza, not Lebanon, my life for Iran!” “Leave Syria, think about us!”) Even as the regime condemned American imperialism, Iran’s leaders always assumed that their own imperial projects would burnish their legitimacy. But it appears that many Iranians no longer want to waste their resources on Arab civil wars.”

One of the things that provided the fuel for this growth in Iranian military support to proxies and involvement in regional conflicts was the signing of the JCPOA in 2015, which lifted sanctions and returned large amounts of frozen Iranian funds to the regime.

Following the U.S. withdrawal from the JCPOA in 2018, and the re-imposition of U.S. oil and banking sanctions, DIA reports that the Iranian official defense budget decreased by 24% in 2019 to $20.7 billion.[2]

And Iran’s defense budget is under even more pressure today as the U.S. maximum pressure campaign continues to take a toll on the Iranian economy with unprecedented sanctions on the Iranian financial system and key sectors of the economy like oil, petrochemicals, and metals.

I continue to worry about the potential for conflict emerging with Iran.

The simmering low-intensity conflict between the United States and Iranian-backed militias came to a boil in January when the U.S. conducted a strike that killed the leader of the Iranian Revolutionary Guard Corps Quds Force, Qasem Solemani,[3] and Iran retaliated by launching scores of missiles at a U.S. base in Iraq injuring 110 U.S. soldiers.[4]  This exchange was merely the culmination of smaller-scale attacks and U.S. retaliation that had led the U.S. and Iran to the brink of a large-scale conflict, one with the potential to engulf the Middle East.[5]

So what do we do about this situation?

Continue the maximum pressure campaign to deplete and limit the ability of the regime to export its malign influence across the region.

Use U.S. military forces to work with partners in the region to deter, and where necessary take steps like the strike on Solemani, to restore deterrence where it has frayed.

Continue to buttress and restore America’s relationships with allies.

During the Trump presidency, the United States has buttressed relationships with traditional U.S. allies like Israel, Saudi Arabia, the UAE, and Qatar that were strained during President Obama’s tenure.

A more confrontational approach to Iran during the Trump administration as contrasted to the Obama administration’s conciliatory approach has been one of the things that have fueled the renewed closeness of these relationships.

During extensive travel throughout the Middle East and work to rebuild tattered relations, I heard from leaders repeatedly about how long-standing close relations with the United States had been severely strained by the Obama administration’s outreach and the existential threat that these states felt from the growth in Iran’s influence.

They praised the U.S. for steps like the Solemani strike and crippling sanctions on Iran but noted that they had new suitors in China and Russia who were competing for influence with their traditional American backers.

Working with allies is also key to maintaining free movement through the Strait of Hormuz.  Iran has built swarms of small boats, a large inventory of naval mines, and an arsenal of anti-ship missiles that can severely disrupt maritime traffic in this strategic chokepoint critical to global trade. [1]

The U.S.-led International Maritime Security Construct (IMSC) has successfully deterred Iranian aggression since it was stood up last year following Iran’s seizure of a British ship and we have not seen similar attacks since.

Ensure the U.S. and our allies have key capabilities needed to address new Iranian capabilities.

Joe Detrani is going to talk about Iran’s missile capabilities.  Having sufficient advanced missile defense systems is key.  After all, Iran is not investing in an advanced air force to challenge the U.S. and others in the region, but rather is investing heavily in missiles.  It is noteworthy that this is the way Iran chose to utilize to retaliate for the Solemani strike in January, launching scores of missiles at U.S. bases in Iraq.

The same is true for the need for advanced cyber capabilities to deal with Iran’s growing capabilities in this area.

Be open for an opportunity for diplomacy given the immense pressure on the Iranian government, yet be realistic.  It may be necessary for the U.S. and our partners to undermine the regime for years before it eventually falls given its unpopularity with the Iranian people if the regime does not eventually show a willingness to support a negotiated resolution.

With that as a brief overview, let me again thank Alireza for inviting me to speak today and I look forward to addressing these issues more in the Q&A period.