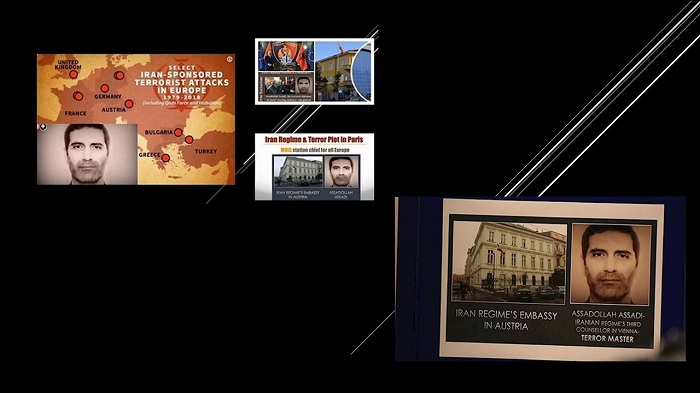 The trial in Belgium of an ex-Iranian diplomat, Assadollah Assadi, and his three accomplices, alleged to have been involved in planning the attack against the NCRI’s Free Iran Summit in Paris in 2018, has got the mullahs’ regime in Iran worried.

The mouthpiece of Supreme Leader, Ali Khamenei, the Kayhan daily, published an article on July 25th, expressing the concerns of the regime about the trial and how it might affect the international perception of the regime.

Reporting by #MEK #Iran
Kayhan daily, the known mouthpiece of #Iranian regime Khamenei, published a piece on July 25 expressing grave concerns over the trial of the mullahs’ diplomat-terrorist Assadi and three other operatives facing bombing/terrorism charges in Belgium. pic.twitter.com/T74MZJKySJ

The newspaper said that the arrest of an Iranian diplomat in Europe was unprecedented and in the eyes of the Iranian regime, illegal. Assadi has been in detention for the last two years since he was arrested by police in France. He has been detained in both Germany and Belgium where the trial is now taking place.

Iran had originally made a decision not to provide a lawyer for Assadi, because, according to the Khayan article writer, it would be “tantamount to acknowledging the illegal due process for a diplomat.” The article went on to suggest that Iran should have arrested and detained a German diplomat in Iran in a tit for tat reprisal.

“The Foreign Ministry, by acknowledging Assadi’s arrest and appointing a lawyer for him has confirmed that Mr. Assadi no longer enjoys diplomatic immunity and thus allowed the [(PMOI / MEK Iran)] and European judiciaries to enter this case.

This is a violation of [Iran’s] sovereignty, neglecting the diplomatic status quo and the fact that complaints against an Iranian diplomat will become the new norm,” the article says.

The trial of Assadi and the three other Iranians who have also been charged with attempting to blow up the Summit began last week.

The fact that Assadi was an acting diplomat in Europe and was caught by European counter-terrorist forces has been an embarrassment to the regime. The fact that the regime was prepared to blow up the Summit is a clear sign that the regime is seriously worried about the influence of the (PMOI / MEK Iran) and will do anything to try and eliminate it.

There are two charges against Assadi and the other three perpetrators: one of terrorism to kill and the other of belonging to a terrorist group. Lawyers for Assadi and two of the other terrorists represented these three in court for the arraignment while the third co-conspirator appeared in person.

The Iranian regime has done its best to try and get Assadi released. It has tried threats of violence, economic and political pressure, but these attempts have all been in vain, something which has just added to the perception of the regime as being incompetent.