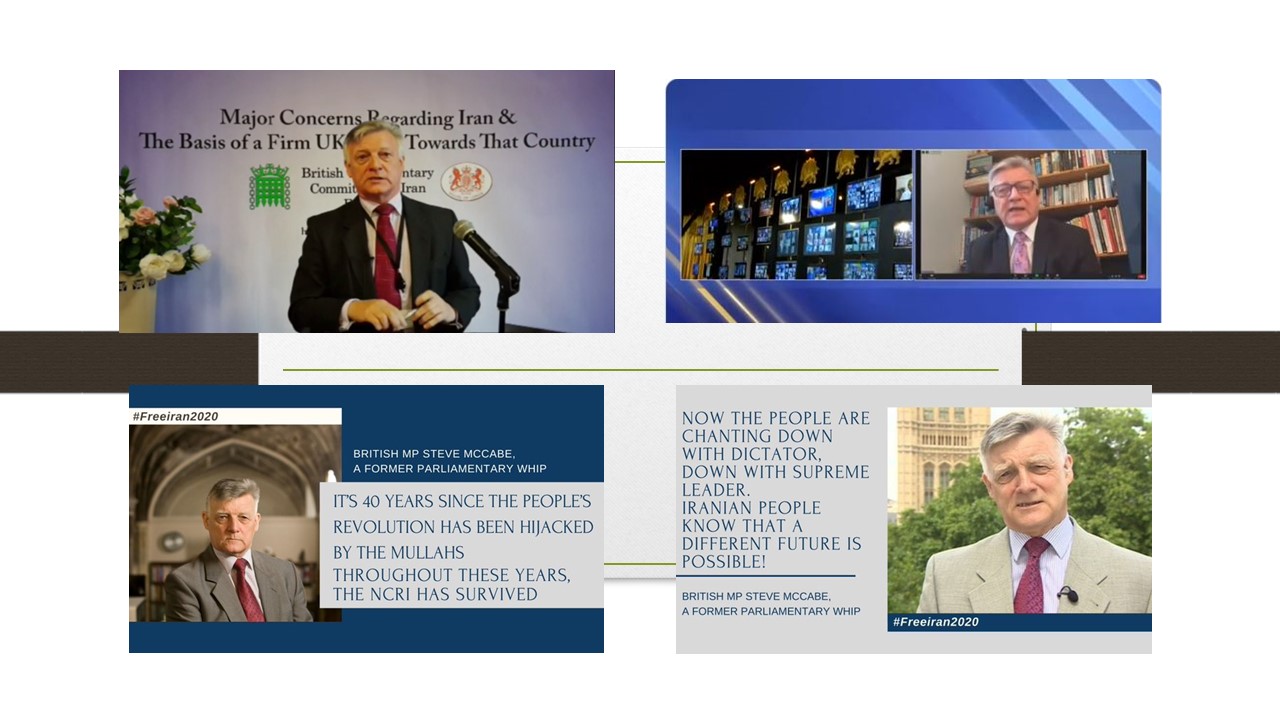 20 June 2020 International online conference: Thank you for inviting me to today’s online conference. It is a privilege to join Mrs. Maryam Rajavi, the distinguished colleagues, honorable speakers, and Iranians from all around the world.

I want to especially express my solidarity with the people of Iran who bravely defy the mullahs’ tyrannical rule.
We have gathered today at a very decisive moment in Iran’s history. On one side, we have the regime which is at its weakest position since 1979, paralyzed by serious crises and internal infighting for more power between various factions.

Great speech by @steve_mccabe in #VirtualConference #FreeIran2020 exposing the regime& highlighting a report by the British Committee for #Iran Freedom titled “SPYING FOR THE MULLAHS: IRAN’S AGENTS IN the UK” demolishing the desperate efforts of the the mullahs MOIS agents https://t.co/B3rTjqq7au

On the other side, the organized Resistance movement NCRI is on the rise, gaining more support inside Iran and greater international recognition each day. At the same time, we see more frequent popular protests against the regime across the country demanding change with chants like “Down with dictator, Down with Khamenei, the Supreme Leader” and “Reformists, hard-liners, the game is over.”

Two things are evident as you celebrate nearly 4 decades of Resistance. Firstly, the Iranian people do not want the regime. And secondly, there is a viable, long-term Iranian alternative in the NCRI led by its president-elect Mrs. Maryam Rajavi to guide and lead Iran’s restive society toward a democratic change and a better future.

UK lawmaker @steve_mccabe: rate of executions in #Iran prove #Rouhani is not a moderatehttps://t.co/2LjiXPgXou pic.twitter.com/lM9peDJnEk

This popular pro-democracy movement is what the regime fears most. In fact, for years the regime’s strategy has been to demonize and tarnish the image of the (PMOI / MEK Iran) with massive propaganda campaigns at home and abroad to claim that there is no alternative to its religious dictatorship.

My colleagues and I know this first-hand as we have seen these efforts by the regime before. My dear colleague, the late Lord Corbett of Castle Vale, published a report on behalf of the British Committee for Iran Freedom in October 2007 titled “SPYING FOR THE MULLAHS: IRAN’S AGENTS IN the UK”.

The report notes based on testimony from my colleagues in the Parliament “that whenever a Member of Parliament expresses support for the goals of freedom and a secular democracy for Iran, as espoused by the NCRI and (PMOI / MEK Iran), they are bombarded with misinformation about Iran’s main opposition”.

The report also states that “On some occasions, MPs and Peers are contacted directly by the Iranian Embassy in London, while more often they are approached by people claiming to be disaffected former members of the (PMOI / MEK Iran) who have been recruited by the regime.”

Just in recent weeks, the regime’s state media admit the Intelligence Ministry (MOIS) is presenting its agents as former (PMOI / MEK Iran) members or critics confirming the findings in our report. A recent article published by a state-run website in this subject name some of these MOIS agents who are on Tehran’s payroll and an active part of “Tehran’s psychological confrontation against the (PMOI / MEK Iran)”. However, the article criticizes the Intelligence Ministry for not doing more as the support for the (PMOI / MEK Iran) in Iran continues to grow in recent years, especially among the youths.

I touched on the issue during a conference in the Parliament back in January discussing the popular protests in Iran and How the UK should respond. As I said then, “When we talk about the weakening of this regime, it is weakening to the extent that it cannot even manage the propaganda which it has excelled at for years.”

#Maryam_Rajavi said that even though the regime is arresting, imprisoning, and even executing it is not stopping the resistance from growing mentioned the fact that the mullahs are attempting to spread lies about #PMOI #MEK #Iran https://t.co/ZtMs1rD3qY #coronavirus @USAdarFarsi pic.twitter.com/CLMUJbSaZH

At that conference, the consensus among the cross-party panelists and my colleagues was that the UK should adopt a firm policy on Iran that recognizes the Iranian solution and alternative offered by the NCRI and its President-elect Mrs.Maryam Rajavi.

As I said then, if we have learned anything over the years, it should be how we could go some way to redressing the balance of power in favor of the Iranian people by proscribing the obvious terrorist organization, the IRGC, for what it is.

I believe that it is time that the UK government take a clearer stance and recognize the Iranian people’s democratic aspirations and the legitimacy of the NCRI and the promise they hold out of the separation of religion and state, plural society, gender equality and the abolition of the death penalty. Britain should be proud to say, we support these things.

I urge the UK Government to do that and will continue to stand with the NCRI, with the Iranian people, and support the cause of human rights and freedom in Iran. I conclude with the echoing words of my friends, the late Lord Corbett, Iran will be free. Thank you.