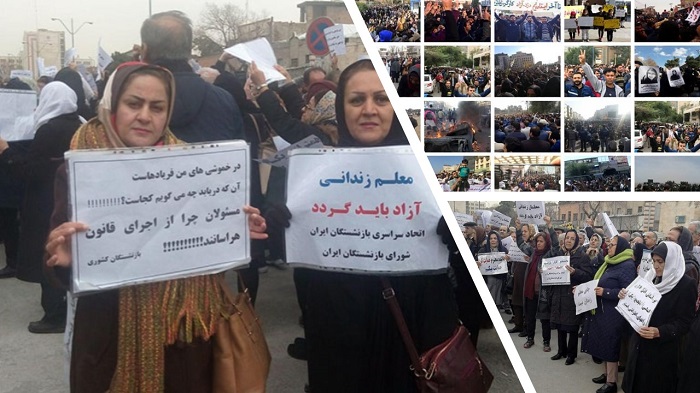 Teachers from a number of provinces throughout Iran made their way to Tehran to hold a protest rally outside the country’s parliament, the Majlis. The protest was linked to the mullahs’ policies of expelling many teachers from the profession for no good reason. One of the key grievances is that teachers are now subjected to tests to prove their ability in the profession. They are demanding that the testing should not take place and that teachers should be allowed to attend teachers’ universities instead.

This is not the only protest to take place as 3.500 coal miners went on strike early this week demanding a pay rise to match the risks they take doing such a job. The regime, after the last rally in late April, promised that they would meet the coal miners’ demands but nothing has happened.

The third mass event to take place was in Ahvaz where the city’s workers, who are employed to maintain the city’s green areas, gathered outside the Khuzestan Province Governorate Office. These workers demands were related to nonpayment of wages since February and also the failure to provide normal bonuses for the New Year between March 2019 to March 2020, the Persian calendar year.

Ahaz also hosted another protest rally by National Iranian Drilling Company (NIDC) employees who for the 3rd time were protesting and this time it was related to the expulsion of large numbers of their co workers which so far had reached 100 but it was expected that a further 500 were going to get their marching orders as well. These NDIC workers held signs with the words ‘’Denying us of bread is no different than cutting off our heads.”

April 29th saw in Tehran a rally held by stonemasons and fruit store owners who were protesting the unbearable conditions that many Iranians have had to bear in recent years.

Last week on Wednesday workers in Bojnourd, who are employed by North Khorasan Province Electricity Department, held a rally protesting that they had not been provided with minimal hygiene products to help them through the COVID-19 global crisis. Recently, two of their co-workers are now in hospital with COVID-19 and their outcomes are not looking good at the present time. The workers are demanding personal protective equipment (PPE)  such as face masks, disposable gloves and disinfectant products so that they will feel safer if they continue to work.  Unfortunately, regime officials are not responding at all to these justifiable requests.

Local gold miners from four villages not far from Qorveh in Kurdistan Province held a protest rally and blocked the road entrance to Sarigoni gold mine. Their protest was about several co-workers who were expelled from this mine. Reports reveal that 14 miners were expelled and two protesting locals were arrested. The demands set were for all the expelled miners to be given their jobs back and that the mine should stop the hiring of miners from elsewhere who were being paid lower wages.

Recently workers employed in Khuzestan Province, southwest Iran by a local water company held a protest rally regarding non-receipt of wages and pensions that should have been paid in the last Iranian calendar year (March 2019 to March 2020).

In Tabriz, northwest Iran, a report was received on Tuesday stating that 50 workers were on strike due to the low wages they have been receiving. This is partly related to the closing down of all areas when all people ordered to stay inside. However the striking workers couldn’t choose and had to go to work but they have reached the point now that they can no longer tolerate their work conditions and are now demanding more pay.

The protest was related to gasoline allocation. The protesters revealed that two months had passed and there was no gasoline being made available except at unacceptably high prices.

This week farmers who have suffered the devastating effects of a recent flood staged a rally outside the regime’s governorate office demanding compensation promised to them by the government for their losses due to the flood.

So all in all International Workers’ Day showed to the world that Iran is experiencing all sorts of problems with workers’ rights and the Mojahedin-e-Kalk (MEK) fully supports these workers in their struggles against the policies of the current regime and look forward to a time when they can be the true democratic force in Iran.