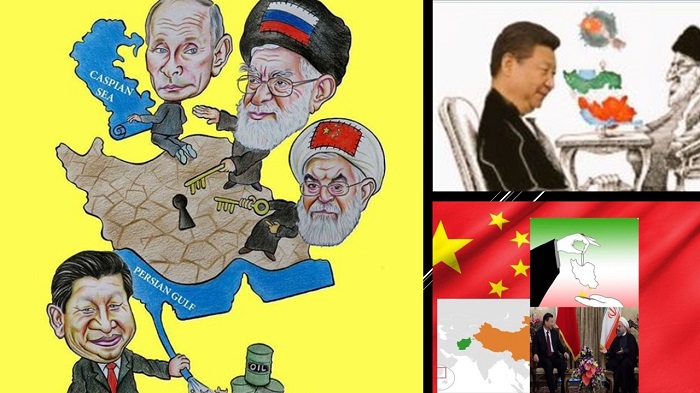 The Iranian regime is intending making a deal with China to boost Iran’s flagging economy.

One of the trade-offs is thought to be the temporary (25-year lease) gift of the Kish Islands in the Persian Gulf to China in exchange for military and international support. Whether China will support Iran’s side in the upcoming debate in the U.N. Security Council on the extension of the arms embargo waits to be seen. The mullahs may be about to do a deal with the devil or at least a fair-weather friend rather than a reliable partner.

1)
Fact: The Chinese Communist Party is a threat to our world.

China, it may be remembered, did not veto the resolution in the Security Council concerning Iran’s nuclear ambitions. It even supported it.

Even some of the Iranian state-run media have questioned China’s motives. The Jahan-e Sanat, a daily, said: “in a crucial situation, China such as Russia preserved its interests with the U.S. and when it was needed, if its interests were jeopardized, turned its back on the Islamic Republic.”

The agreement’s text has not been released by the regime, presumably because the regime fears an explosive reaction from Iranians. But much of the agreement has already been leaked so what Iran and China are intending to do is more or less known. The Petroleum-Economist even made a prediction nearly a year ago in September 2019 when an article concluded that “Chinese companies will be given the first refusal to bid on any new, stalled or uncompleted oil and gas field developments.

#Maryam_Rajavi“For Khomeini, Khamenei, and Rouhani, neither water, nor the land, nor the culture, nor the lives, nor the wealth of the #Iranian people have any value. Only one thing matters: Preserving the rule of the mullahs https://t.co/05rPzOjDkt #FreeIran2020 #NCRI #Iran #MEK

Chinese firms will also have the first refusal on opportunities to become involved with any etches projects in Iran, including the provision of technology, systems, process ingredients, and personnel required to complete such projects.

China will also be able to buy any oil, gas, and patches products at a minimum guaranteed discount of 12pc to the six-month rolling mean price of comparable benchmark products, plus another 6pc to 8pc of that metric for risk-adjusted compensation.

China intends to utilize the low-cost labor available in Iran to build factories, designed and overseen by large Chinese manufacturing companies, with identical specifications and operations to those in China, according to the Iranian source.”

The #Iranian regime’s 25-year deal with #China over-investment in Iran’s water resources has spurred outrage across the country, especially regarding what is essentially the selling off of Iranian islands.#MEK #FreeIran2020https://t.co/OkEf4q1Btj pic.twitter.com/MFyI46JFrl

So, what’s in it for Iran? The Oil Price website stated that the regime would have its oppressive capacities strengthened. 110 senior IRGC members would go to China and Russia every year for training. At the same time, 110 Russians and Chinese would go to Tehran for training.

While the regime is ready to sell off Iran’s assets to stay in power, ordinary Iranians face poverty at home and the dire spread of the theCovid-19 pandemic, with 78,000 deaths already recorded in Iran, with many deaths caused by the regime’s policy of forcing people back to work.

Many poorer Iranians find it hard to make enough money to eat. Prices of basic food items have risen far more than normal recently, making things like meat, milk, and vegetables too expensive to buy. The inflation rate in Iran in the last 40 years has averaged around 20% a year, far above the average rate around the world of between 3and 5%.

Mrs.Maryam Rajavi, the National Council of Resistance (CNRI) of Iran’s president-elect hit the nail on the head when she said recently: “For regime’s supreme leader Ali Khamenei and Rouhani, neither water, nor the land, nor the culture, nor the lives, nor the wealth of the Iranian people have any value.

Only one thing matters: Preserving the rule of the mullahs, which Khomeini described as the ‘absolute imperative,’ and for which one can abrogate Islamic edicts, and first and foremost give away the land and water of Iran and its people and massacre its valiant children in the prisons. Indeed, what could an invader do that the mullahs have not done to Iran and the Iranian people? The mullahs are among the worst in Iran’s history.”