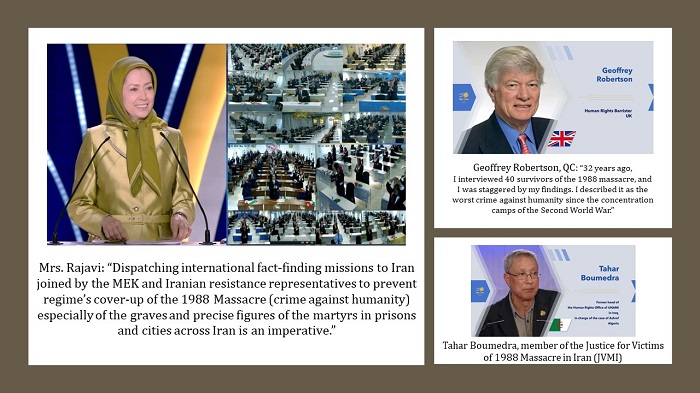 When the November 2019 protests were taking place, more than 1,500 unarmed protesters were shot by Iran’s Revolutionary Guard terrorist forces.

At least that is what everyone was led to believe but in fact, information released since indicates that the number of murders was far higher.

The fact that the world turned a blind eye to the 1988 massacre more than 30 years ago meant that the regime never cares what the world thinks when mass executions and long prison terms are inflicted on people who no longer want the regime to maintain power. Protesters involve themselves in protest marches demanding their democratic rights to vote in a free and democratic government. The 32nd anniversary of that popular uprising resulting in a massacre happens this week.

32 years ago, the supreme leader, Ruhollah Khomeini, was determined to eliminate all opposition movements so he issued a fatwa to rid all prisons of any regime opponents. It was in the weeks that followed when at least 30,000 prisoners throughout Iran, most of whom supported or were members of the People’s Mojahedin Organization of Iran (PMOI / MEK Iran), were murdered. Their bodies were thrown in unmarked graves together.

The protest movement has grown over the years but still, no one in the regime has been held accountable for these cold-blooded murders. The Justice for Victims of the 1988 Massacre in Iran (JVMI) which has gathered together relevant information can name 96 individuals who acted as Death Committee members in 1988 and today at least 87 still play important roles in different wings of the Iranian regime’s bureaucracy.

List of key figures as members of the death committee

Back on August 28th, 2016, Mostafa Pourmohammadi, the Tasnim news agency quoted his words which were “we are proud to have carried out God’s commandment concerning the [MEK] and to have stood with strength and fought against the enemies of God and the people.”

Testimony from an eyewitness

“I was arrested in 1981 for supporting the MEK. When the massacre started in 1988 I was in solitary confinement,” …….“I witnessed that none of 250 prisoners in the top section of ward 3 of Evin prison survived and from 200 prisoners in ward 3’s lower section all but two were executed.”

“We must hold these people accountable because many of them are still in power.”#1988Massacrehttps://t.co/GBlflS3Lzd

“32 years ago, I interviewed 40 survivors of the 1988 massacre, and I was staggered by my findings. I described it as the worst crime against humanity since the concentration camps of the Second World War.”

Campaign for the call for justice

In 2016, Mrs. Maryam Rajavi, the President-elect of the National Council of Resistance of Iran (NCRI), published her call for justice for the 1988 massacre victims. As a result, many mass graves were discovered.

Tahar Boumedra, spoke at the Free Iran Global Summit who used to head the UN Advisory Mission for Iraq’s Human Rights Office and is also a member of the Justice for Victims of 1988 Massacre in Iran (JVMI), said: “The crime committed against political prisoners in 1988 has been well established and documented.

The UN and relevant institutions have been informed and received documents on this issue.”……… “In 2018, the former human rights commissioner Zeid Hussein said the UN has informed the regime to investigate the crime.

Two years later, the Special Rapporteur on Human Rights in Iran is asking the same thing. We know the mullahs’ regime will not investigate. It is naïve to believe the mullahs would investigate themselves. Let’s warn the UN that enough is enough.

The regime will not investigate its crimes and impunity has emboldened the Iranian authorities. They continue to commit crimes. It is time to think about a coalition of civil society and NGOs to lobby all together and make sure we find a way to take this crime to national courts across the world who accept universal jurisdiction.”

Mrs. Rajavi said “Dispatching international fact-finding missions to Iran, joined by the MEK and Iranian resistance representatives to prevent regime’s cover-up of the 1988 Massacre (crime against humanity), especially of the graves and precise figures of the martyrs in prisons and cities across Iran is imperative.”