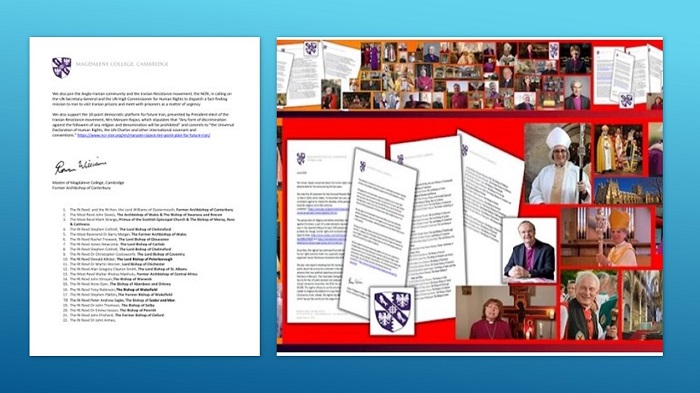 Some 38 prominent religious leaders in the UK has issued a statement in support of the Iranian Resistance and the ten-point plan for a free Iran created by Mrs. Maryam Rajavi, the President-elect of the National Council of the Resistance of Iran (NCRI), just days before the annual Free Iran Global Summit on Friday.

The signatories, including former Archbishop of Canterbury and member of the House of Lords Dr. Rowan Williams, wrote that they “remain deeply concerned” over the deteriorating human rights situation in Iran, citing the March 2020 UK statement for the Universal Periodic Review Adoption of Iran as evidence of abuse.

They noted that the regime instituted possibly the biggest crackdown on the Iranian people in decades, following nationwide protests in November demanding regime change. At least 1500 people were shot dead in the streets, while thousands more were injured and arrested, facing torture and possibly the death sentence.

The statement read: “Since then, the regime has continued its arrests of dissidents, students and other human rights activists inside Iran, especially targeting the supporters of the organized Iranian Resistance movement, the NCRI and the [Mujahedin-e Khalq or]  (PMOI / MEK Iran).”

The religious leaders went on to talk about the continued crackdown on religious and ethnic minorities, including harsh prison sentences for Christians, as well as the cover-up of the coronavirus outbreak in January to ensure a bigger turn out at revolution anniversary parades and the Parliamentary Elections in February. This cover-up has turned into an attempt to hide the true number of deaths to justify sending the country back to work in April.

The statement read: “We applaud the UK Government’s decision to classify Iran as a human rights priority country and to commit to holding it to account for its human rights abuses. We now call on the UK Government and the FCO to do more at the UN and internationally to turn this commitment into concrete actions that end the impunity that the perpetrators of serious human rights violations enjoy in Iran.

We also urge the UK Government to work with allies to put more diplomatic, political, and economic pressure on the regime to secure the immediate release of all political prisoners, detained protesters, and dual national held unjustly in the country.”

They also joined calls for the United Nations to urgently send a fact‐finding mission to Iran to meet with prisoners. They also applauded Rajavi’s 10‐point democratic platform for a future Iran, which is committed to “the Universal Declaration of Human Rights, the UN Charter, and other international covenant and conventions”.

the regime has continued its arrests of dissidents, students, and other human rights activists inside Iran, especially targeting the supporters of the #Iranian Resistance #NCRI and the #PMOI #MEK. https://t.co/GViKseJSGT #FreeIran2020 @USAdarFarsi