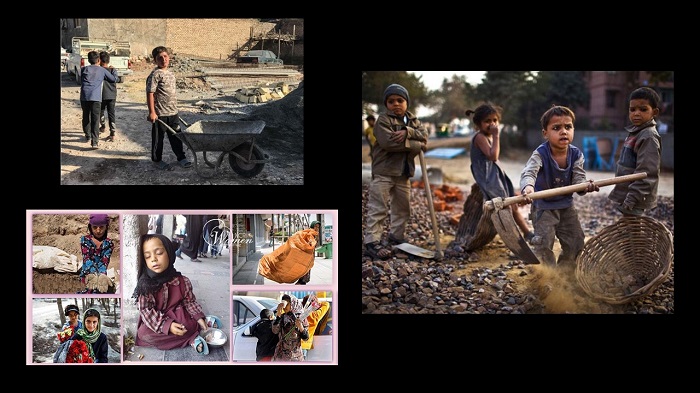 June 12th was “World Day Against Child Labor.” It’s hardly a day to celebrate, especially in Iran, where the number of working children forced into poverty has been steeply on the rise, while the clerical regime of the mullahs turns a blind eye, almost in the same way they do to the virus causing havoc across the country.

You can see these kids on the streets at intersections trying to eke out a living, selling handmade crafts. They get there by 5 a.m. every day and are never sure where they will go as it gets dark.

According to one of the members of parliament, Zahra Sa’ii, many of the kids are sent to the city by their parents who live in depressed socio-economic regions of the country.

Today, June 12th, is World Day Against Child Labor#Iran, ruled by the mullahs’ regime, has a child labor population of 7 million.
Be their voice. pic.twitter.com/PUXIT8AJ5C

Early on at the start of the Covid-19 epidemic, there was an alarming report on social media circulated. It was of a 7-year-old child searching through rubbish along a street. When he was asked why he was there, he replied: “I’m doing business… We have nothing at home… We don’t have rice and oil… We’re starving.”

Even three years ago, there was already an obvious problem with the number of child laborers in Iran. It was acknowledged by a member of the Board of Directors of the parliamentary Social Affairs Committee, Nahid Tajeddin, that the real number of child laborers was hard to estimate as they don’t have registered identity papers. The numbers are estimated to be somewhere between 3 and 7million.

Two years after Tajeddin’s comment, Zahra Sa’ii reported that the number of child laborers was increasing in Tehran.

The regime’s official news agency, IRNA, also said that the population of child laborers was “growing” in a report on June 1st this year.

The regime, meanwhile, has little interest, it seems, in doing anything about the problem of the rising number of kids in poverty forced to scrounge a living on the streets and rubbish dumps. It’s as if they don’t exist, or more accurately, tackling the issue is not exactly a number one priority for the regime.

The regime’s spokespersons invent different reasons when challenged about child laborers. The state-run Khaneh Mellat reported on July 14th last year that the regime says it hasn’t “sufficient funds.” The regime also claims that most of the child laborers don’t have families to support them, but in reality, it’s the other way round. Poor families are relying on their children to support them.

According to a member of parliament, Hossein Maghsoudi, 40 percent of the estimated 5,000 child laborers in Tehran are the sole breadwinners for their families. “Many of them are only between 10 and 15 years old,” said Maghsoudi.

Many child laborers are disease-ridden

Zahra Sa’ii, the member of the Iranian parliament referred to earlier in this article, reported to the state-run Khaneh Melat website (ICANA) on July 14th, 2019 that “most of these children earn money in difficult ways; in hot or cold weather, they carry a sack and collect garbage, known as dirty gold, but they are given only a small share of profit from their findings. This is a new kind of slavery in the age of technology.”

Many child laborers are sick from a variety of diseases. 4 to 5% have AIDS. 66% have intestinal infections. 10% have urinary infections and nearly all have gum disease and dental caries. Many of these kids also suffer from mental and emotional problems including suicidal thoughts and depression.

Amongst this cohort of child laborers are some who are as young as 4 to 12 years old. They live in home-made sheds made out of any kind of junk they can scavenge. They live in the most unsanitary conditions without running water or toilets. They have many kinds of infections and suffer from severe malnutrition.

Some young girls work on the streets searching through garbage who are in an even worse state than the boys. Their long hair is often matted and full of lice. They cannot wash their hair because of the lack of water. “This is a new kind of modern slavery,” he said in a report to the state-run Tahlil-e Iran website on January 8th, 2018.

Young girls who are forced by poverty to search through garbage on the streets are exposed to a variety of dangers. They may be physically and sexually abused. Whatever they earn they may lose to thieves and thugs. There are many really sad accounts of what has happened to these children. One small girl was set alight when thugs poured gasoline on her after trying to steal what little money she had. This happened in the city of Isfahan on April 22nd this year.

Another young girl, probably no older than 7 years old, was attacked by stray dogs in Shahr-e Rey, south of Tehran. She suffered from terrible injuries and was eventually taken to a hospital, according to the Tasnim state-run news agency in a report on January 29th, 2020.

Iranian children are the hungriest, the most innocent and the most oppressed sector of Iranian society. Their conditions are tantamount to organized crime by the mullahs’ religious dictatorship. #NoChildLabour #WDACL #Iran pic.twitter.com/GfD97kPh78

With the ever-increasing social problem of child laborers in many of Iran’s cities, the question is why the regime is turning a blind eye to such horrors in its midst.

Mrs. Maryam Rajavi is the President-elect of the National Council of Resistance of Iran’s (NCRI): Iranian children are the hungriest, the most innocent and the most oppressed sector of Iranian society. Their conditions are tantamount to organized crime by the mullahs’ religious dictatorship.