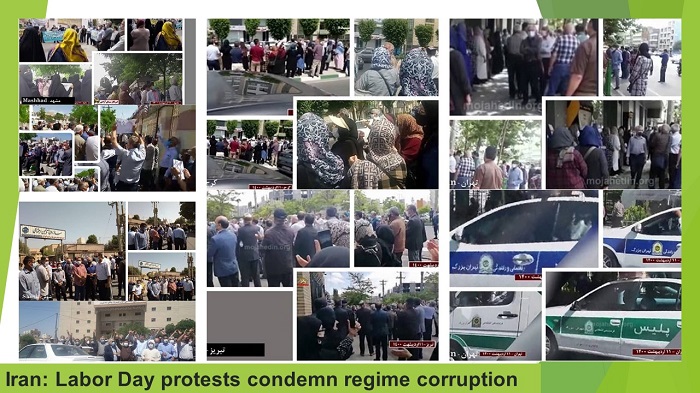 The National Council of Resistance of Iran (NCRI), and the People’s Mujahedin of Iran (PMOI / MEK Iran), reported that the Iranian workers marked International Labor Day by holding protest rallies across the country.

The workers in their rallies reiterated their demands, including wages that allow them to conduct a decent living, job security, a clampdown on government corruption, and better working conditions.

The workers chanted, indicating that the mullahs regime’s in all institutions are deprived workers of their rights and make their lives miserable.

The workers in their protests stressed that government corruption is one of the main causes of the poor living and working conditions.

The workers chanted in many cities: “The workers’ enemy is the government of looters,”

“The insurance organization betrays workers and the Majlis supports it,”

The workers reiterated that the mullahs’ regime has failed to deliver on its promises to adjust their wages based on the growing inflation rates. And chanted: “What happened to the adjustment law? It was all a lie and deceit,”, “Living costs are calculated in dollars, our salaries are paid in rials.”

Skyrocketing rise in the prices

It is worth knowing in the past few years, the rial has lost more than 80 percent of its value, sinking to an all-time low. This has caused a skyrocketing rise in the prices of all goods. Meanwhile, the wages of salaries of workers have not changed.

The workers also slammed the state-run media for its role in censoring the voice of workers and refraining from unbiased reporting on the grievances of the labor community. The workers chanted: “Shame on the state television and radio,”.

One of the significant aspects of the workers’ protests was the political nature. “We have heard so many lies that we will not vote anymore,” the workers chanted, indicating their will to boycott the regime’s upcoming presidential elections. With this slogan, the workers joined their voices to those of pensioners, farmers, and other communities who are fed up with the regime’s corruption and reject its sham elections.

The worker’s protests took place despite the regime’s intentions to intimidate workers and prevent them from gathering on International Labor Day.

The regime’s repressive forces were on alert in cities where workers held their protest rallies.

In Tehran, security forces attacked protesters and arrested many of them.

These protests are the extension of a series of rallies that have been held during the past few months and weeks across the country and show how the Iranian people’s will for overthrowing the mullahs’ regime.

Mrs. Maryam Rajavi, the President-elect of the National Council of Resistance of Iran (NCRI), saluted the deprived protesters, saying that despite the repressive measures on Workers’ Day, they succeeded in showing their “outrage” against the clerical dictatorship and called for the boycott of the sham presidential election.