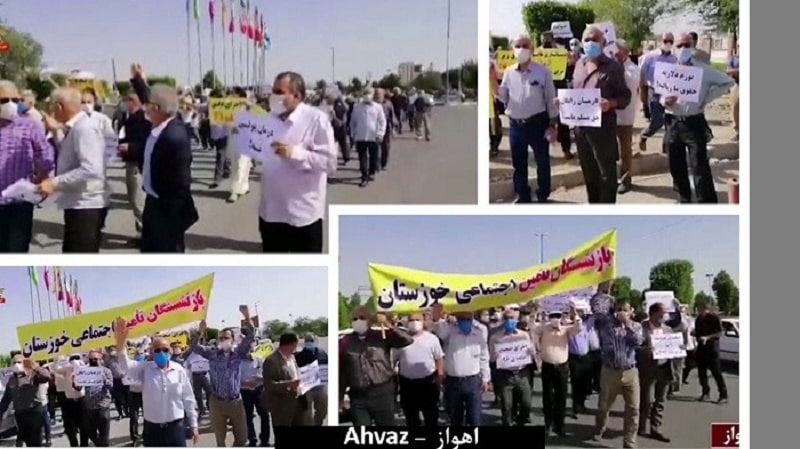 The National Council of Resistance of Iran (NCRI), and the People’s Mujahedin of Iran (PMOI / MEK Iran), reported that the pensioners and retirees of Iran’s Social Security Organization have been taking to the streets on a weekly basis in order to draw attention to their plight. Their protests have been organized and planned, and the protesters have been calling the regime out for its failure to acknowledge and address their concerns.

The pensioners and retirees held rallies in numerous towns and cities across the country, including the capital Tehran as well as Arak, Ilam, Karaj, Khorram, Kermanshah, Mashhad, Neyshabur, Noshahr, Qazvin, Rasht, Shiraz, Shush, Tabriz, and Zanjan to name just a few. The gatherings took place outside the offices of the Social Security Organization apart from in Tehran where they took place in front of the headquarters.

The pensioners not only have to deal with extremely low payments, but these payments are also frequently paid very late. They have a number of economic demands that they vow to continue repeating until they get what is fair.

The pensioners have also made it very clear that they will not be participating in the regime’s presidential elections because they know that every single candidate will not be focused on the people and what is best for them.

The protests on Sundays have become a regular occurrence. It must be noted, however, that the protests have gradually become less about economic grievances and more political in nature. It is clear that the protesters see their only hope of improvement through regime change. Not only have they said they will boycott the presidential elections, but they are calling for all their fellow citizens to do the same.

The protests being arranged by the pensioners and retirees are growing in size and the regularity of the gatherings is an indication that the momentum will continue. Many pensioners are living far below the poverty line and are unable to make ends meet.

Over the past few years, the country’s national currency, the rial, has lost more than three-quarters of its value, yet during this time the pension payments have barely changed.

The average pensioner receives around 25 million rials every month, yet the poverty line is currently at 100 million rials in parts of the country.

The government’s own policies indicate that pensions should be adjusted according to the inflation rate. But this is not happening and it is the pensioners and retirees that are paying the price.

Unlike with previous uprisings and major protests, the regime has been reluctant to crack down violently on the retirees. Instead it has resorted to silence and ensuring that no media coverage is given to the events.

The authorities are aware that the situation is very volatile and that any violence towards the protesters will inflame the situation.

The pensioners and retirees have come to the conclusion that they have nothing to lose. They have very little chance of being given their rights so they are drawing attention to their situation in a peaceful but forceful way.