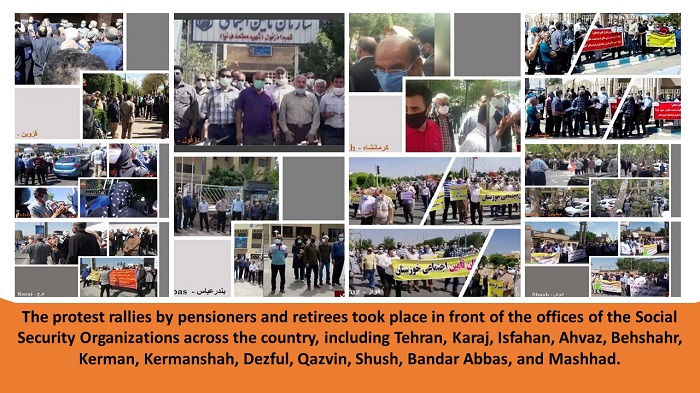 The National Council of Resistance of Iran (NCRI), and the People’s Mujahedin of Iran (PMOI / MEK Iran), reported that the pensioners and retirees of Iran’s Social Security took to the streets and held protest rallies across Iran on Sunday.

The protest rallies by pensioners and retirees took place in front of the offices of the Social Security Organizations across the country, including Tehran, Karaj, Isfahan, Ahvaz, Behshahr, Kerman, Kermanshah, Dezful, Qazvin, Shush, Bandar Abbas, and Mashhad.

The pensioners and retirees are fed up with the mullah regime officials ignoring their demands and unpaid salaries.

The pensioners and retirees slammed officials for their corrupt policies, saying: “We don’t want unqualified officials,”.

The retirees and pensioners chanted: “Our problems will be solved if there was one less embezzlement case,” the protesters chanted, referring to corruption cases involving government officials who have stolen billions of dollars from the country’s wealth.

As the protests of the retirees and pensioners continued a significant change in the protests is the political nature of their demands. In their previous protest, they were focused on high inflation rates and prices and low pensions. But since the beginning of Persian New Year, the slogans of the rallies are becoming political with protesters calling for a boycott of the elections.

The retirees and pensioners in the city of Mashhad have chanted on Sunday: “We’ve heard so many lies that we won’t vote anymore,”. Since the Iranian regime’s presidential elections, scheduled for June, are fast closing in. Like many other communities across the country, the pensioners have come to realize that the regime’s political lineup will bring no change to their lives, and as long as the mullahs are in power, poverty, overdue wages, and skyrocketing prices will be the staples of their lives.

In the past months, retirees and pensioners have grown into a nationwide movement that continues to spread across the cities in Iran. Also, the number of people participating is increasing with each passing week and month of these gatherings.

The retirees and pensioners in the city of Kerman, on Sunday, also chanted: “We pay our expenses in dollars, but receive our wages in rials.” (The rial, Iran’s national currency, has seen a huge dip in the past few years, losing more than 80 percent of its value).

The mullahs’ regime would not adjust pensions based on changes in inflation rates, which they have promised. According to a 2020 census, there are 18 million pensioners in Iran. These are part of Iran’s impoverished masses, live under the poverty line.