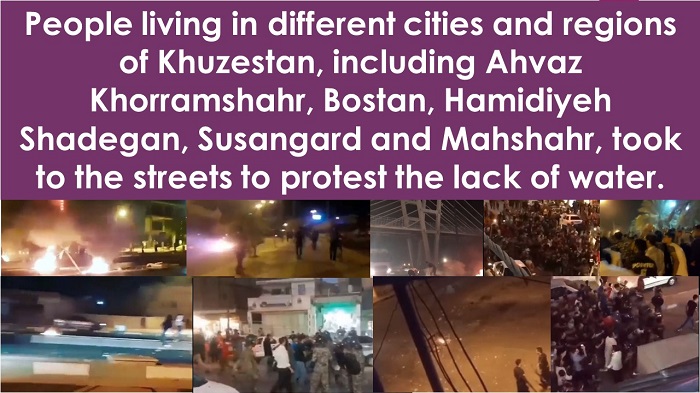 The National Council of Resistance of Iran (NCRI), and the People’s Mujahedin of Iran (PMOI / MEK Iran), reported that the people left without water demonstrate in different cities Khuzestan.

On Thursday, July 15, 2021, in the evening, people living in different cities and regions of Khuzestan Province (southwest Iran), including Ahvaz, Khorramshahr, Bostan, Hamidiyeh, Shadegan, Susangerd, and Mahshahr, took to the streets to protest the lack of water.

In Khuzestan Province in some cities, such as Khorramshahr and Susangerd, the State Security Force (SSF) opened fire to prevent protests from spreading.

People in the Bostan town of Dasht-e Azadegan, west of Ahvaz, chanted, “We will not accept humiliation,” protesting the lack of water due to transferring it to other cities.

In Hamidiyeh, people rallied in the streets, despite the heavy presence of repressive SSF force. They chanted slogans against the regime officials and protested the continuous water cut. The SSF failed to disperse the angry youth and demonstrators and retreated as the rally expanded.