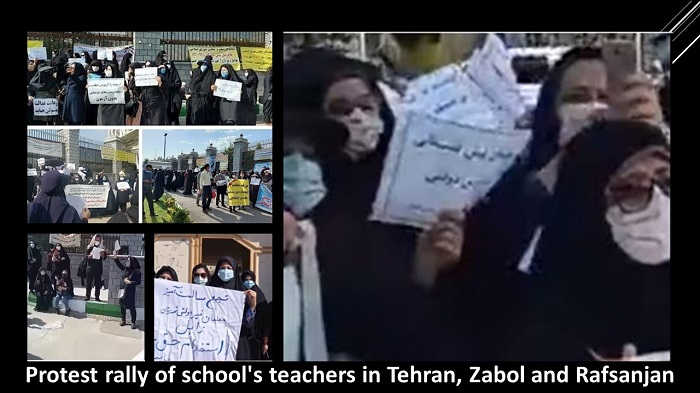 The National Council of Resistance of Iran (NCRI), and the People’s Mujahedin of Iran (PMOI / MEK Iran), reported that the school teachers in Tehran, Zabol, and Rafsanjan protested demanding fair salaries.

On Sunday, May 23rd, a group of freelance teachers working in the country’s non-profit schools gathered in front of the (Majles) parliament so that their job demands be addressed.

Protesters say: ‘We do the same as the formal teachers, but we get one-third of them; We are deprived of all job benefits; Even our insurance is not paid in full.

These teachers say: ‘Our wages are sometimes less than the minimum wage; That is, we are not considered simple workers.

According to these teachers, the majority of freelance teachers in the country have bachelor’s and even master’s degrees and have several years of quality work experience, but are in the worst working conditions.

The teachers are protesting discrimination in salaries and poor working conditions. These protests, which have been ongoing in other provinces as well, started after the regime’s administrative court of justice ruled to reduce the salaries of many workers.

The state-run IMNA news agency on May 15 report that, janitors and utility workers receive 25-30 million rials per month, which given the current state of inflation and skyrocketing prices, is not much.

According to many estimates, the poverty line for a family of four is around 100 million rials per month, which means these workers are receiving 25-30 percent of what they need to provide the most basic needs of their families

Tasnim state-run also on February 21 reports that at least 16,000 utility workers are living on 28-million-rial wages, and it’s very hard for them to run their lives with such low salaries. They are also receiving no bonuses for extra work hours.