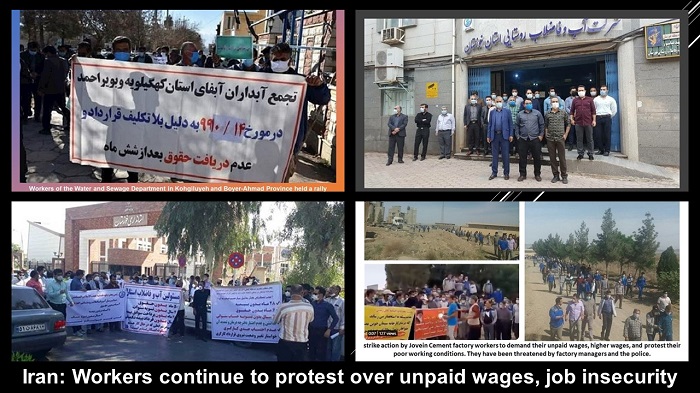 The National Council of Resistance of Iran (NCRI), and the People’s Mujahedin of Iran (PMOI / MEK Iran), reported that the workers continue to protest over unpaid wages, job insecurity.

The mullah regime officials and media continue to warn about the possibility of another round of nationwide uprisings, protests continue across Iran.

The Iranian people’s patience regarding the economic situation is running thin. Iranian people continue to protests in many different cities despite the threat of coronavirus and the regime’s repressive forces.

MEK supporters from the city of Sabzevar on Tuesday, May 18, reported that the workers of the Jovein Cement, Sabzevar, Razavi Khorasan Province, northeast Iran Factory went on strike and held a protest rally at their workplace.

The Jovein Cement workers are protesting delayed paychecks, low wages, and poor working conditions. Protesters say that in this economic situation, unpaid paychecks have created many livelihood problems for them and their families, so they will not return to work until all their demands are met.

MEK supporters from the city of Ahvaz reported that the workers of Abfar, the Rural Water and Sewage Department, gathered in front of the governorate on Tuesday, protesting officials’ refusal to pay several-month insurance premiums and demanded a change in their job classification.

One of the protesters said, ” Workers’ insurance premium has not been paid for about 30 months and we have not had an insurance booklet for nine months. In addition, we have been working without any contract since March.”

MEK supporters from the city of Gachsaran also on Tuesday, reported that the workers of the Water and Sewage Department in the city of Gachsaran, held a rally, demanding three-month delayed paychecks and insurance premiums. They are working without a constant contract.

One of the protesters said, “We have not had a contract since March, because the Water and Sewage Department set a very low payment, and no contractor will take over the job.”

MEK supporters from the city of Tehran also reported that on Tuesday, a number of company Bus drivers gathered in front of the Tehran City Council. The rallied drivers demand the implementation of a job classification plan, protesting delayed paychecks and job bonuses.

One of the protesters said, over the past few years, union members have repeatedly referred to or corresponded with the city council and the management of the Bus Company to pursue a revision of the job classification plan.

Sayed Rahim Mir Abdullah, the head of the union of the Islamic Labor Council of the Bus Company, said: “Since 2005, no revision has been made in the job classification plan of Bus Company workers. Since then, economic developments have been to the detriment of wage earners.” (Eghtesaad 24 website, May 18)

Sayed Rahim Mir Abdullah continued: “The problem is that despite all the promises, the exact time of the review of the job classification plan is still unknown. Due to the upcoming city council elections, this promise may be postponed. In return, nothing will happen to control the cost of living for workers,”.