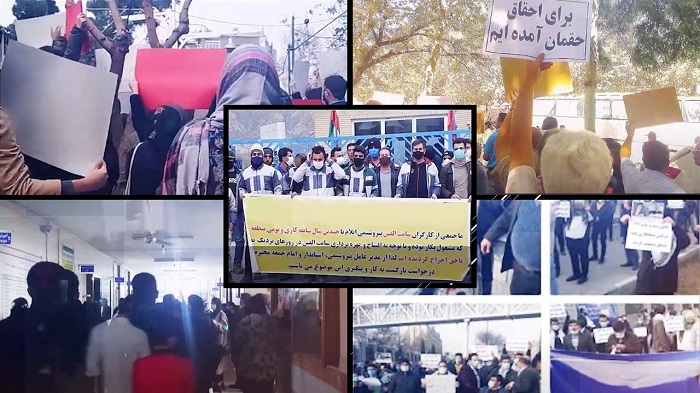 Students from the city of Izeh Gatheringin the Education Department

A group of Izeh city students gathered in the local education department, protesting in-person exams. Students, chanted: “We will not take exams,” at the department. “Our classes were held virtually, and the exams should not be held in-person,” said the protesting students.

Protest by the Haft-Tappeh Workers

Employees and workers of Haft-Tappeh Sugarcane Complex held a rally in front of the ministry building in Tehran. Protesters demanded the regime revoke the Complex privatization and transfer the factory from the private sector back to the public sector.

Protest by Veteran Employees in front of Majlis

In Tehran, employees are known as ‘Isargaran,’ or veterans, held a protest in front of the Parliament (Majlis), protesting a newly passed directive that prevents them from gaining new employment. Mullah’s regime shows no mercy even to those who had sacrificed their lives and health for the regime’s survival.

Creditors’ protest in front of Majlis

The Islamic Revolutionary Guard Corps (IRGC) is behind many of these so-called institutions that have plundered citizens’ belongings with hollow promises.

In Ilam province, to cut the petrochemical plant’s expenditures, employers fired a group of workers despite the coronavirus pandemic and its horrible consequences in various aspects, including the economy. Following this disgusting act, fired workers held a gathering in front of the plant, demanding their return to work.

A group of registered customers of Shahin Car held a protest in front of the Competition Council bureau, protesting mandatory prices. Due to the country’s dire economic conditions, automaker companies frequently raise the prices to compensate for disadvantages at the expense of customers.

A group of registered customers of Nissan Van staged a gathering, protesting the automobile’s fluctuating prices. “Since 2019, we have registered for Nissan Van, however, we have gained nothing until now,” said a protesting customer.

In Tehran, a number of customers of Copa car produced by Reagan automaker company held a protest about the unclear fate of their investments. During their protest in front of the Iran Consumer and Producer Protection Organization (CPPO), peoples whose money has been plundered by corrupt individuals protested officials for issuing licenses without precise scrutiny.

In Kohgiluyeh and Boyer-Ahmad province, employees and workers of Dehdasht petrochemical plant staged a protest, demanding their arrears. During their protest held in front of the facility, workers protested employers’ indifference to their dire living conditions.

Over 191,600 people have died of the coronavirus in Iran, according to reports by the Iranian opposition the National Council of Resistance of Iran’s (NCRI), and the People’s Mojahedin Organization of Iran (PMOI / MEK Iran).

While the novel coronavirus has swept the country, many employers refuse to pay the workers’ minimum paychecks. In such circumstances, workers must endanger their health and hold gatherings to achieve their inherent rights. In several cases, government-backed employers call the state security forces (SSF) to suppress protesters. However, impoverished workers have no option but to continue their protests to feed their families.