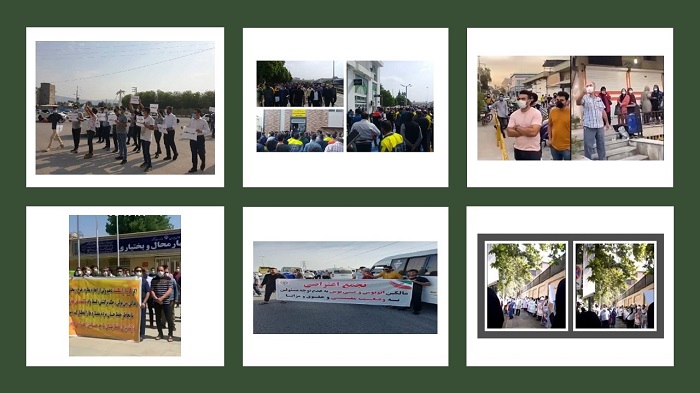 The National Council of Resistance of Iran (NCRI), and the People’s Mujahedin of Iran (PMOI / MEK Iran), reported that people from all walks of life rallies and protests across various cities in Iran.

Protesters showed their anger over the mullah regime officials and highlighted their contradictory claims about justice and equality. People rallies and protests in various cities in Iran. They also announced their boycott of the upcoming Presidential sham election in June.

Retirees and pensioners, affiliated with the Social Security Organization once again held protests in 14 cities across the country on Sunday, April 25. They protested mullah regime officials for dire living conditions, high prices, and below-poverty-line salaries. Because of their frustration, retirees announced the boycott of the upcoming presidential election scheduled for June, chanting, “We will no longer vote, as we heard so many lies.”

MEK supporter from Tehran province — on Sunday, April 25, reported the nurses staged a gathering in front of the judiciary chief Ebrahim Raisi’s bureau. Nurses protested officials’ failure to fulfill the law of tariffs and register their careers as hard and harmful jobs.

MEK supporter from Bushehr province — on Sunday, April 25, reported the car customers held a rally in front of the provincial judiciary. They protested the automaking company’s failure to deliver their pre-purchased cars.

Protesters had written on their placards: “Multi-billion fraud, where is justice?” “Where are our cars?” and “What have they done with our money?”.

Shopkeepers of the malls of Mellat

Also on Sunday,  shopkeepers of the malls of Mellat, Azadi, and Lian gathered in the streets protesting the government’s decision for shutting down the malls.

Workers and employees of Gold-Iran Industry

MEK supporter from Kerman province — on Sunday, April 25, reported the workers and employees of Gold-Iran Industry staged a rally expressing their anger over the employers’ profiteering decisions.

Merchants from Chaharmahal and Bakhtiari

MEK supporter from Chaharmahal and Bakhtiari province — on Sunday, April 25, reported the merchants from clothing, bag, and cosmetic guilds held a rally in front of the provincial governorate.

MEK supporter from Mazandaran province — on Sunday, April 25, reported the railroad workers of the North Railroad Company continued their strike for the second day in a row. railroad workers protested officials’ failure to follow up workers’ demands.

MEK supporter from Khuzestan province — on Sunday, April 25, reported that more than 500 bus and minibus drivers affiliated with the petrochemical plant held a rally in Mahshahr’s economic-petrochemical especial zone.