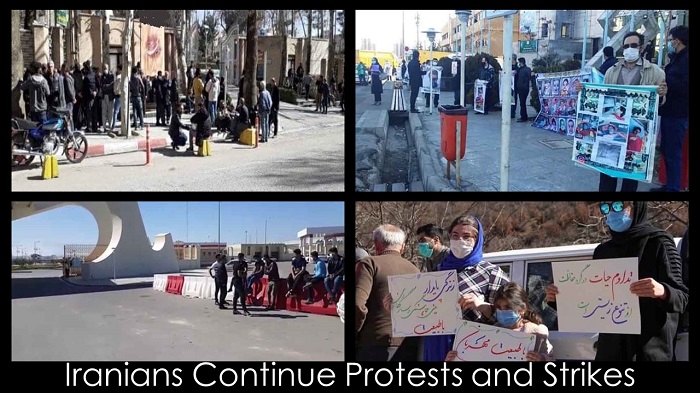 The National Council of Resistance of Iran (NCRI), and the People’s Mujahedin of Iran (PMOI / MEK Iran) reported that the people of Iran staged rallies and protests in various cities, protesting officials’ failure to resolve their dilemmas.

Ongoing protests and strikes despite the coronavirus outbreak show society’s disappointment about the entire ruling system while they see protests as the sole instrument to obtain their inherent rights.

The National Council of Resistance of Iran (NCRI), and the People’s Mujahedin of Iran (PMOI / MEK Iran) reported that coronavirus fatalities in 480 cities exceed 215,700.

MEK supporters from the city of Tehran reported that the families of people who suffer from Spinal Muscular Atrophy (SMA) held a rally in front of the Health Ministry. They protested officials’ failure to provide medicine for muscular atrophy.

Patients’ families were saying: “Our children have rights for treatment and life,”

“Why does Iran not provide reliable medicine so far?” and

“Sanctions are only an excuse for not importing the medicine,”

Spinal Muscular Atrophy (SMA) is a group of hereditary diseases that progressively destroys motor neurons—nerve cells in the brain stem and spinal cord that control essential skeletal muscle activity such as speaking, walking, breathing, and swallowing – leading to muscle weakness and atrophy.

MEK supporters from the city of Sanandaj reported that a group of street-sellers in Ferdowsi Street held a rally in front of the Provincial Governorate. They protested officials’ failure to follow up their demands. They expressed their discontent about officials’ decisions, compelling vendors to start their businesses after 6:30 pm.

The plan has put these poor people in dire conditions. They demanded an increase in their work hours, reasoning that they can earn nothing after 6:30 pm.

“Citizens have purchased their necessities and gone to their houses before 6:30 pm,”

“We must stare for clients while since the specified time there are no people on the streets. In such circumstances, we cannot provide our living expenditures.”

MEK supporters from Alborz province reported that the residents of Nasser-Abad-e Kajour village held a rally in front of the lead mine in northern areas. They protested and the continuation of activities of lead and zinc mining exploration.

MEK supporters from Khuzestan province reported that a group of unemployed youths of Shahrouei village, in a suburb of Behbahan city, staged a gathering in front of the gate of Section-30 of Bidboland Refinery – Phase 2. They demanded government-linked employers recruit them, asking, “Why do employers take their relatives from different cities but refuse to recruit us as local forces?”