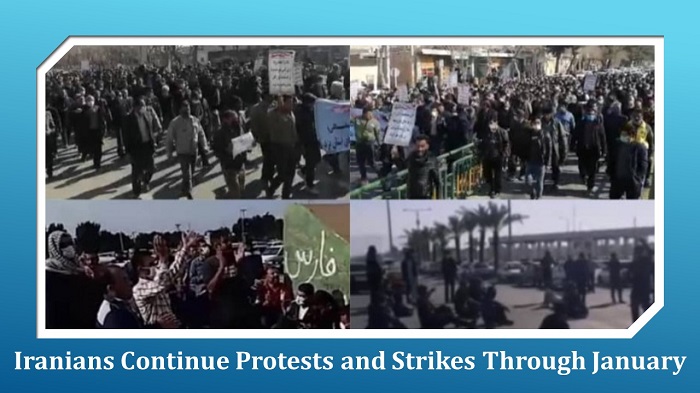 The National Council of Resistance of Iran (NCRI) and the  People’s Mojahedin Organization of Iran (PMOI / MEK Iran) reported that on January 16th, the Iranian people took to the streets to vent their anger at the regime’s plundering and profiteering off the backs of the Iranian people. There were three rallies that took place in Isfahan and Khuzestan provinces.

(PMOI / MEK Iran) supporters from the city of Isfahan reported that angry farmers took to the streets as they have done before. But this time they were marching in protest at the way the Zayandehroud River’s water was being extracted with no regulation whatsoever.

Recently it appears that regime-backed businesses have extracted the water and have altered the path of the river for their economic gain. This has caused unprecedented drought conditions which have destroyed the local farmers’ livelihoods.

Farmers from Isfahan city held a rally at Khurasgan Square, demanding their water rights. Then, the farmers marched in Isfahan’s streets and chanted “Death to the liar government.”

In the weeks leading up to the protests farmers had repeatedly called on officials to stop the uncontrolled extraction of the Zayandehroud River’s water, but nothing was done. It is the IRGC dominated companies that have violated the farmers’ right to get access to water after the completion of their planting.

At the same time, (PMOI / MEK Iran) supporters from the city of Shush reported that unemployed youths and Haft-Tappeh sugar cane workers gathered to take part in a rally in Khuzestan province. They were quick to blame officials for the poverty and unemployment that has been brought to many families.

(PMOI / MEK Iran) supporters from the city of Behbahan reported that Khuzestan province’s unemployed youths from Shahrouei village in Behbahan county held a rally in front of the Bidboland refinery plant.

In recent months, many rallies had taken place at the same place. Their demand is that government-linked employers should recruit them. However, employers have gone ahead and employed non-native Iranians, which has angered the youths.

To make the whole situation worse, one of the security forces insulted and acted badly towards a child who was looking for work which instilled anger in the people, so they chanted “Disgrace, disgrace.”

Angry workers in Khuzestan province who worked for the Haft-Tappeh sugar cane complex once again came together to assert their rights by saying. “Death to the worker, Hail to the oppressor”.

Workers demanded that officials pursue the case of Haft-Tappeh’s corrupt CEO, Omid Assad-Beigi, immediately. They criticized the judiciary because it showed mercy in Assad-Beigi’s case while easily summonsing and arresting poor workers who are just demanding their rights.

The judiciary chief, Ebrahim Raisi, has often spoken about justice and fair behavior but he still puts the least privileged last. He has a ruthless background where he ordered the execution of protesters, dissidents, and activists. Under his reign, the judiciary has often used the death penalty, torture, amputation, and other types of corporal punishments.