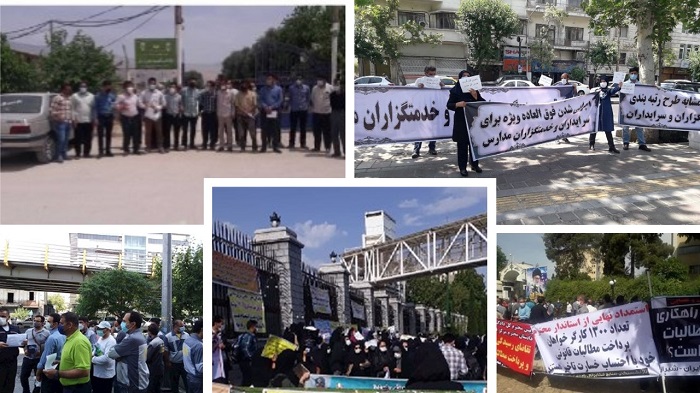 The National Council of Resistance of Iran (NCRI), and the People’s Mujahedin of Iran (PMOI / MEK Iran), reported that the people of Iran continue rallies, protests, and strikes across the country.

the people of Iran continue rallies, protests, and strikes across the country. Showing their anger over the mullah’s regime plundering and profiteering policies.

MEK supporters from the city of Izeh on Saturday, May 22, reported that workers and employees of the Water and Sewage Organization in Izeh held a rally in front of the Labor office.

Workers protested officials’ failure to pay their salaries for several months and expressed their frustration over their unstable working conditions.

MEK supporters from the city of Tehran on Saturday, May 22, reported that employees of Pazhan dairy company in Nasim-Shahr stopped working and launched a strike protesting officials’ failure to pay their overdue salaries.

Protesters blaming officials for indifference and inaction toward their demands despite their constant rallies and gatherings. These workers had rallied last week but officials ignored their grievances.

MEK supporters from the city of Tehran on Saturday, May 22, reported that the operation staff of Tehran Metro-Line 5 staged a gathering in front of the main entrance gate below the Hafez Bridge.

The operation staff of Golshahr-Sadeghieh path protested officials for dismissing 60 personnel during the past month.

MEK supporters from the city of Tehran also on Sunday, May 23, around 200 employees of the Exploitation Company of Metro rallied in front of the City Council. They protested officials’ failure to meet their demands.

MEK supporters from the city of Mashhad on Saturday, May 22, reported that drivers of diesel flotilla in Mashhad parked their vehicles beside the Qadir highway and held a rally.

They also continued their rally on Sunday, May 23, for the second day in a row. They protested the municipality’s oppressive measures, which ban them from their regular business.

MEK supporters from the city of Kerman on Saturday, May 22, reported that miners of the Asimoun Chromite mine went to the fifth day of their strike.

MEK supporters reports declared that the miners’ consecutive strike and officials’ concerns about public backlash forced the government to give some concessions.

Families of Asimoun miners as well as residents of the cities of Asimoun and No-dej rallied and marched supporting the miners’ strike.