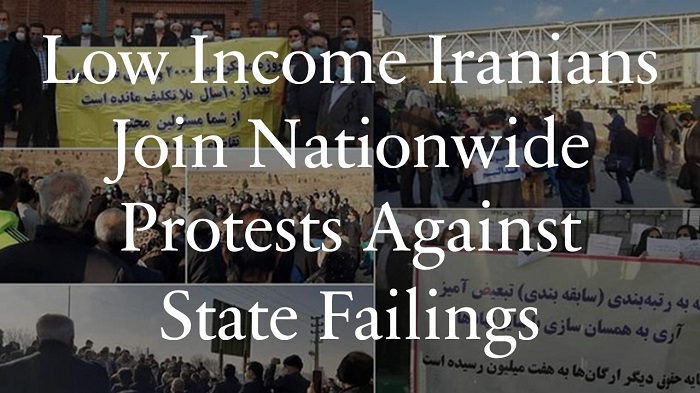 According to a thorough report compiled by the National Council of Resistance of Iran (NCRI), and the  People’s Mojahedin Organization of Iran (PMOI / MEK Iran), Iranian retirees assembled in front of government buildings in 19 cities throughout the country, including Tehran, Mashhad, Isfahan, and Yazd.

They held protests in relation to the government’s poor response to their demands. The protesters, who get retirement checks from the State Welfare Organization’s (SWO) pension fund, chanted slogans at the rallies.

(PMOI / MEK Iran) networks from inside Iran said that more than 3 million retirees are on the SWO’s payroll. This particular group has been vulnerable due to the country’s economic struggles caused by international sanctions and corruption and mismanagement of state funds.

The first demand they raised in their 10-point statement, is a rise of 50 in retirement pensions as this was required because the out of control inflation affected the country.

So far, despite the many letters written to the regime’s authorities, they have done nothing except make promises that have never kept.

The present wave of retiree protests started in December 2020. At that time, the state-funded Iranian Labor News Agency reported groups gathering in Tehran (in front of Parliament) and several other cities including Tabriz, Mashhad, Isfahan, Rasht, Yazd, Bojnourd, Khorramabad, Ilam, Ahvaz, and Arak.

Retirees And Farmers Protest For Their Share Of State Money#Iran-ian government retirees in Tehran and farmers in Isfahan held protests on Wednesday, demanding money they believe is due to them from the state.https://t.co/e4hi5MUTH8 #IranProtests pic.twitter.com/VZFjPs50eu

The regime did not fulfill its promises

In the present Iranian year, which commenced on March 21st, 2020, the government made a promise to increase the minimum monthly salary of civil servants by 70% to 2.8 million tomans. Some steps have also been taken to increase retirees’ pensions, Tasnim reported in August 2020.

Earlier in 2020 on the 15th of July retirees had staged protests in Tehran and several provincial capitals to mark “Social Welfare Day’’.

Retirees have the following demands:

One retired person said after attending one of the protests that “it seems like the authorities are finding it very hard to see the suffering of retired people and how their lives have fallen below the poverty line. But we have no choice but to participate in protests and shout out our problems even during the pandemic.”

The retiree went on to say that “many of us have lived a respectable life, despite taking other jobs in our retirement years to feed our family. But now there are so many unemployed young people these days that we don’t have many opportunities to find second or third jobs. So we have no other choice but to join street demonstrations and rallies.”

Mrs. Maryam Rajavi is the President-elect of the National Council of Resistance of Iran’s (NCRI): The workers who are on strike, the nurses, teachers, educators, and retirees who hold protests, and courageous women and youth of Iran have risen up for freedom and their most basic rights