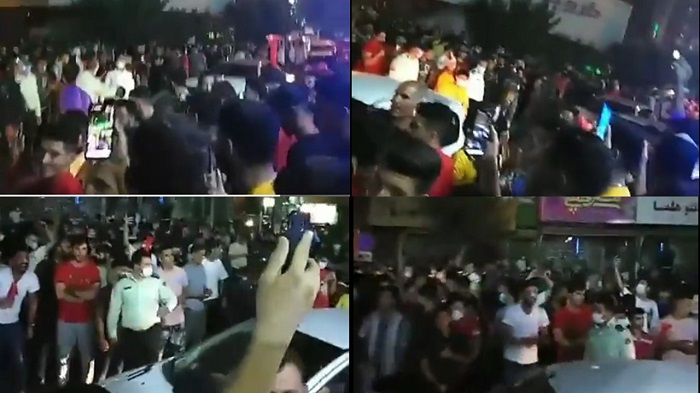 The National Council of Resistance of Iran (NCRI), and the People’s Mujahedin of Iran (PMOI / MEK Iran), reported that following a soccer match on Saturday, tensions started once more in Tehran. These protests followed a two-week period of unrest in Khuzestan province over water shortages. Several days after protests in Tabriz over price hikes and power disruptions in Tehran’s Mobile Market.

The people of Iran are increasingly frustrated with 42 years of corruption and incompetence. The regime’s oppressive methods are no longer sufficient to keep this restive society under control. The regime’s callous Covid-19 policy, which included inactivity in the face of escalating crisis and immunization shortages, has also failed.

The National Council of Resistance of Iran (NCRI), and the People’s Mujahedin of Iran (PMOI / MEK Iran), reported that the coronavirus death toll in 547 cities surpasses 345,300.

Mrs. Maryam Rajavi, the President-elect of the National Council of Resistance of Iran (NCRI), expressed her condolences to the millions of bereaved people whose loved ones fall victim to the Coronavirus every day and said that due to the criminal and plundering policies of the regime, the dimensions of the COVID-19 death toll in Iran are much larger than other countries in respect of their populations.

Mrs. Maryam Rajavi added Khamenei wanted to block the uprisings with the policy of mass human losses due to Coronavirus, but the uprising in Khuzestan and other provinces showed that this gimmick is no longer effective. Getting rid of poverty, unemployment, and Coronavirus and oppression and repression can only be achieved with the overthrow of this regime and the establishment of democracy and freedom in Iran.

“For a week, Tehran was closed. When they returned to work, they found themselves without power. “These problems will not be tolerated,” the state-run Arman daily declared on August 1.

Every incident now has the potential to spark protests, with people directing their anger towards regime officials and chanting anti-government slogans like “down with the dictator.”

These protests show that Iran’s society is no longer willing to tolerate poverty, discrimination, unemployment, starvation, deception, corruption, and other mullah-created ills.

Mothers of Iranian protest martyrs marched and assembled in Tehran on Friday, November 2019. Their display proves that the oppressive taboo has been broken, and the dictatorship no longer has the ability to scare the public.

“What triggered last night’s protests in Tehran? What has prompted the youth to yell anti-establishment slogans? “Where did it come from?” says the narrator. On Saturday, the state-run Ensaf News published an article. On July 23, days after riots in Khuzestan, Ensaf News predicted that “this winter will witness the country’s greatest chaos, and protests are unavoidable.”

The regime’s parliament just approved a proposal to restrict the internet. This initiative has the potential to spark additional protests, alarming the regime’s insiders. Some government officials have warned that adopting this strategy will spark a new round of demonstrations. Others, on the other hand, worry that enabling people to use the internet will lead to greater protests and people being more involved in the organized Resistance movement.

Both warnings are accurate, but they also demonstrate that the government is in an impasse and is running out of time.

On Sunday, the state-run Aftab-e Yazd daily wrote, “Confronting people’s demands would only waste time,” adding that any alternative option “would have the opposite results.”

The current protests in Iran will also highlight the regime’s illegitimacy to the rest of the world, leading to further international pressure on the mullahs and their oppressive regime. The official media has expressed concern about the regime’s future as a result of these recent developments.

The protests taking place in different cities of the country these days have a tremendous negative impact on foreign policy. The combination of these challenges causes us not to be optimistic about the near future. Even with a closer look, these challenges will be frightening for the system if there is no fundamental thought.