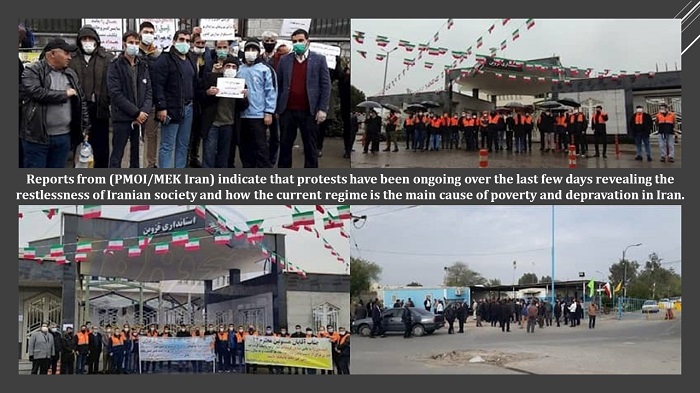 Reports from Iran obtained by the National Council of Resistance of Iran (NCRI), and the People’s Mojahedin Organization of Iran (PMOI / MEK Iran), indicate that protests have been ongoing over the last few days revealing the restlessness of Iranian society and how the current regime is the main cause of poverty and deprivation in Iran. MEK supporters from the city of Mahshahr reported that on Monday, Mahshahr Petrochemical workers, in southwest Iran, held a rally and marched for the 2nd day in a row protesting the regime’s refusal to put into place a job classification plans and discrimination against workers.

MEK supporters from the city of Qazvin reported that on Monday, the 3rd day of protests took place by toll workers in Qazvin province. The job status of these workers should have been confirmed sometime in February, but so far, the regime’s authorities have not yet reached a decision regarding the return of these workers to work, so leaving them with an uncertain future.

MEK supporters from the city of Tehran reported that on Sunday,

On Sunday, some janitors employed by the Ministry of Education took part in a rally in front of the regime’s Parliament, protesting their low wages.

On Sunday, some contract teachers of the Technical and Vocational Education Organization took part in a rally in front of Iran’s parliament. They chanted the words “We have suffered but have not seen justice.”

On Sunday, a group of workers of the HEPCO heavy machinery factory in southwest Iran, came to Tehran to take part in a protest in front of the regime’s parliament regarding their poor job security and their ongoing low wages.

MEK supporters from Khuzestan province reported that on Sunday,

On Sunday, Khuzestan province retirees in SW Iran joined collectively in a protest march to the local governorate suspending a banner at its entrance with the words “the cry of hungry retirees.”

In the past few days, there have been several protests by retirees throughout Iran, and on February 3rd, for the 2nd week in a row, lots of retirees and pensioners who have to survive off Social Security assembled in Tehran and 19 other cities. Their aim was to protest the terrible living conditions they have to endure and skyrocketing prices.

On Saturday, February 6th workers in the municipality of Sisakht in Kohgiluyeh and Boyer-Ahmad Province, southwest Iran, took part in a rally demanding their 10-months delayed wages. Since the beginning of the current Persian year, these workers last received their salaries in March and have not seen anything since that date.

Instead of assisting people, the regime’s authorities have been using brutal methods to oppressing people and their protests.

Mrs. Maryam Rajavi, the President-elect of the National Council of Resistance of Iran (NCRI), applauded the brave retirees for uniting and protesting and she said “Only by taking it to the streets, we can obtain our rights. So long as this regime is in power, poverty, inflation, and unemployment, as well as corruption and repression will increase. The only way to resolve it is to get rid Iran of the ruling religious fascism and establish freedom and justice in our captive homeland.”

Mrs. Rajavi stated that “so long as this regime is in power, poverty, inflation, and unemployment, as well as corruption and repression will increase. The only way to resolve it is to get rid of the ruling religious fascism in Iran and establish freedom and justice in our captive homeland.”