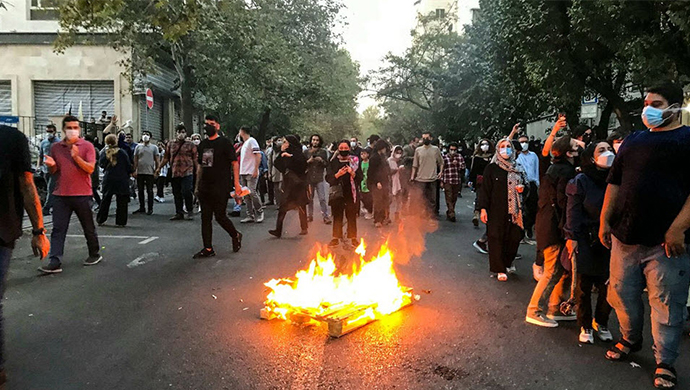 Monday marked the 19th consecutive day of protest rallies across the country, which have spread to 172 cities and all 31 provinces. According to reports compiled by the People’s Mojahedin of Iran (PMOI/MEK), the regime has killed 400 civilians and arrested 20,000 others so far.

Following the death of Mahsa Amini, these protests began. The 22-year-old woman from Saqqez in Kurdistan Province, western Iran, was arrested by the regime’s so-called “Guidance Patrol” on Tuesday, September 13, at the entry of the Haqqani Highway and transferred to the “Moral Security” agency.

The security forces severely beat Amini and due to the severity of her injuries, she passed away on Friday, September 16. Protests erupted soon after in several cities, including Tehran and Saqqez, and have continued and grown since then.

Teachers and students are on strike in various cities in #Iran. They have risen up against oppression by chants of “death to the dictator.” The force of solidarity among students, teachers and professors is expanding the uprising to overthrow the criminal mullahs. #IranProtests pic.twitter.com/89XsTEdnKZ

On Sunday, college students across Iran demonstrated solidarity with the ongoing nationwide uprising against the mullahs’ regime. The Sharif University of Technology in Tehran was the main site of these protests, with students protesting during the day and regime security forces surrounding the campus by nightfall.

The regime’s security forces surrounded this campus to prevent students from joining the street protests that were spreading throughout the capital. Security forces fired pellet rounds into crowds attempting to flee the campus grounds. According to reports, many people were arrested and transferred to Evin Prison. The students, on the other hand, stood firm and demonstrated valiant resistance.

On the same night, people from all over Tehran began rallying outside Sharif University’s gates, demanding that authorities release the arrested students and allow those trapped inside to leave. Anti-riot units and plainclothes agents from the regime were deployed to keep the crowd from approaching the university gates. Protesters outside the university chanted anti-regime slogans and “Release the students!” in support of the college students. Regime security forces retaliated by opening fire and using tear gas on this crowd.

Simultaneously, business owners in a number of cities went on strike to protest the regime’s brutal crackdown on protests.

People were also protesting in large numbers in Tehran’s Teymouri and Punak districts, where they also blocked roads as their demonstration continued into the night.

People in the Isfahan districts of Zeynabieh and Jough-abad set up roadblocks with fires as part of their anti-regime protests. Security forces stayed away and refused to enter these tense areas.

Protests and clashes between protesters and regime security forces continue in Zahedan, according to activists.

Maryam Rajavi, President-elect of the Iranian opposition National Council of Resistance of Iran (NCRI), urged Tehran residents to “rush to the aid of students at Sharif University of Technology,” adding that “the students’ uprising has terrified the clerical regime. Solidarity is the key to defeating their scheme.”

She praised the Iranian people’s ongoing uprising and the growing number of protest rallies organized by college students across the country. “The beginning of strikes, protests in high schools, and uprisings in Zahedan, in addition to Iran Protests in Kurdistan, the north, and the south, indicate the Iranian people’s firm resolve to turn the dark page of the mullahs’ rule and begin a free and bright era in Iran,” she added.

On behalf of the Iranian people’s Resistance, I call on the people of the world to help the protesters and I emphasize on the following requests:#IranProtests pic.twitter.com/2GCBOFL1hk