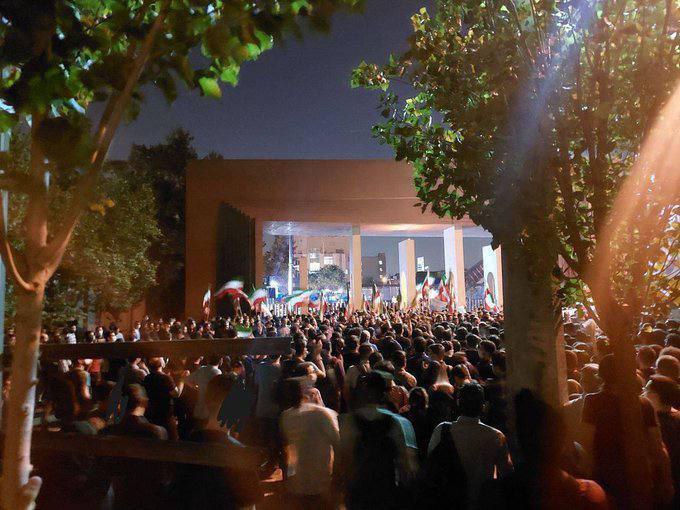 Protests in Iran went on for the 21st day in a row. Protests against the regime have been reported in more than 172 cities across all 31 provinces. At least 400 protesters have been killed by the clerical regime, and more than 20,000 have been detained across the nation. Thousands of women, including journalists, have been detained.

Students at Sharif University had staged a protest just a few hours earlier. Security personnel from the clerical regime imprisoned students in the Sharif University of Technology’s parking lot, fired live ammunition at them, and then took them into custody. According to reports, the detained students were transported to a military outpost in Tehran’s Afsarieh.

Parents and young people who value freedom gathered in front of the university to call for the regime to release the students. In order to scatter the crowd, security personnel used tear gas.

The previous day in Tabriz, the clerical regime carried out the same action. Security personnel intended to detain the students by closing the university’s gate and encircling it. However, as students and their families gathered around the university, the security forces’ siege was broken and the protest spread into the city.

Students have played a significant role in shaping the recent nationwide protests and continue to hold daily rallies.

October 5 – Sanandaj, western #Iran
Locals continued their protests against the regime on the 20th night of the uprising.
"Death to the dictator!" they chanted.#IranRevolution#MahsaAmini#مهسا_امینی pic.twitter.com/d9vhJJrxVn

“Tehran has become a detention center,” “Free all imprisoned students,” and “I would give my life for Iran” were among the slogans that students chanted.

On the 20th night of #IranProtests the courageous youths have risen up in Tehran, Kermanshah, Saqqez, Isfahan, Kerman, Mashhad, Qom, Jolfa, Nurabad Mamasani, etc. with chants of “Death to Khamenei” and clashed with security forces. People are resolved for #IranRevolution2022 pic.twitter.com/2wmHN4yfQy

Protests in dozens of locations in the capital

On Sunday, young people protested in numerous Tehran districts. At least 30 cities saw a strike by business owners, bazaar vendors, and truck owners in support of the demonstrations.

Iranian sources claim that the regime transports detained protesters in ambulances without license plates. The detainees are housed in the IRGC ward at the Greater Tehran Penitentiary as well as Ward 209 of Evin Prison.

On October 1, there were reports of demonstrations and strikes in at least 42 cities. All throughout the day, hit-and-run clashes and protests broke out in various parts of cities, with youths and women taking the lead. The regime’s forces were unable to cope with the vast scope of the protests.

Local sources estimate that the regime’s forces carried out a massacre in Zahedan on Friday that resulted in more than 100 deaths and injuries. As a result of Iranians’ outrage over the deaths of their fellow citizens, protests against the regime have intensified.

"Following 43 years of tyranny, there is almost no sane soul in #Iran who wouldn’t care about where their lives are headed, and being emotional is indeed an indication of responsible intellect," writes @AladdinTouran on #IranProtests2022 https://t.co/HWmxCk0aHi