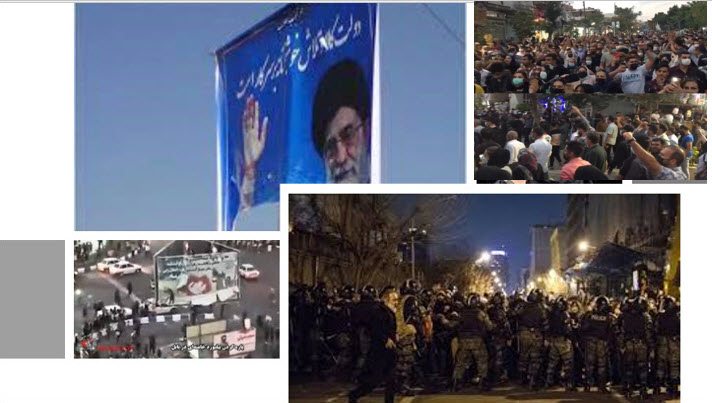 The presence of the Iranian regime’s supreme leader, Ali Khamenei, in the ‘joint graduation ceremony for the cadets studying in the academies of the Islamic Republic of Iran’s Armed Forces’ was deemed a failure, as it did not bring him the expected ‘power’ that the regime wanted to present in the midst of nationwide protests.

The signs of weakness

During his speeches, signs of weakness were visible on his face. One of the indicators was his inability to ignore the ruling head’s contradictions. Khamenei is well aware that they will worsen in the future.

This is evident in this section of his speech: “At first, some (cleric) elites made announcements and statements without investigation and most likely out of compassion. Some blamed law enforcement, while others blamed the system. Now that they’ve seen what’s going on and what happened in the streets as a result of their words running parallel with the enemy’s plan, they should make amends and clearly state that they oppose what happened and the foreign enemy’s plan.”

While many officials remained deafeningly silent, only Ahmad Janati and Hassan Khomeini responded to the regime’s desperate request.

On the night of October 2, when the regime’s special forces and plain clothes officers attacked, surrounded, beat, and injured many Sharif University students, the Islamic Association of Students of Sharif University of Technology confronted him.

“The students who sat in for the second day in a row, exercising their right to protest following a hollow promise by the university’s president to release all the imprisoned Sharif students who were arrested last week, suddenly faced a barrage of security officers and plainclothes officers who, in a tremendous act, besieged the university and attacked students and professors with all kinds of weapons,” they wrote in their statement.

Plan to silence the voices of protesting students

“Behind this blatant violence, it appears that there was a pre-planned scenario to silence the voices of protesting students, and Sharif University was supposed to be a lesson for the rest of the country’s universities, as well as to satisfy the greed of some extremists,” they added.

The day after Khamenei’s desperate statements, cleric Mohammad Ali Ayazi said in a statement published by the state-run Setareh-e Sobh daily, “Some of the clerics do not accept the guidance patrol and say that this is not a way to make the society religious. Some religious thinkers and researchers believe that some things done in the name of religion are unacceptable.”

The current situation is so hostile to Khamenei that even the regime’s ‘Enjoining Good and Forbidding Wrong’ headquarters spokesperson stated, “We have said several times, this kind of treatment by the guidance patrol or some concerned people would maybe have worked in the 1980s, but now we can no longer force people to submit to the hijab law with violent treatment.”

The regime’s forces are desperate as a result of the Iranian people’s resistance over the years, particularly through the involvement of Iranian women of all ages.

Mohammad Bagher Qalibaf’s speech in the Expediency Council paints a clear picture of the regime’s position. “If we want to overcome this cognitive war, we must first correct these conflicts and different perceptions and understandings in this part of governance,” he said. “Because of its inefficiency, the enemy uses this platform to cause these problems.”

This has harmed the effectiveness of repression and is widening the gap between the regime’s forces and the Iranian people.

"The right to resistance against an illegitimate regime that persistently kills, and tortures is among the oppressed #Iranian people’s inalienable rights," writes @amsafavi https://t.co/sLo46q5Zxv