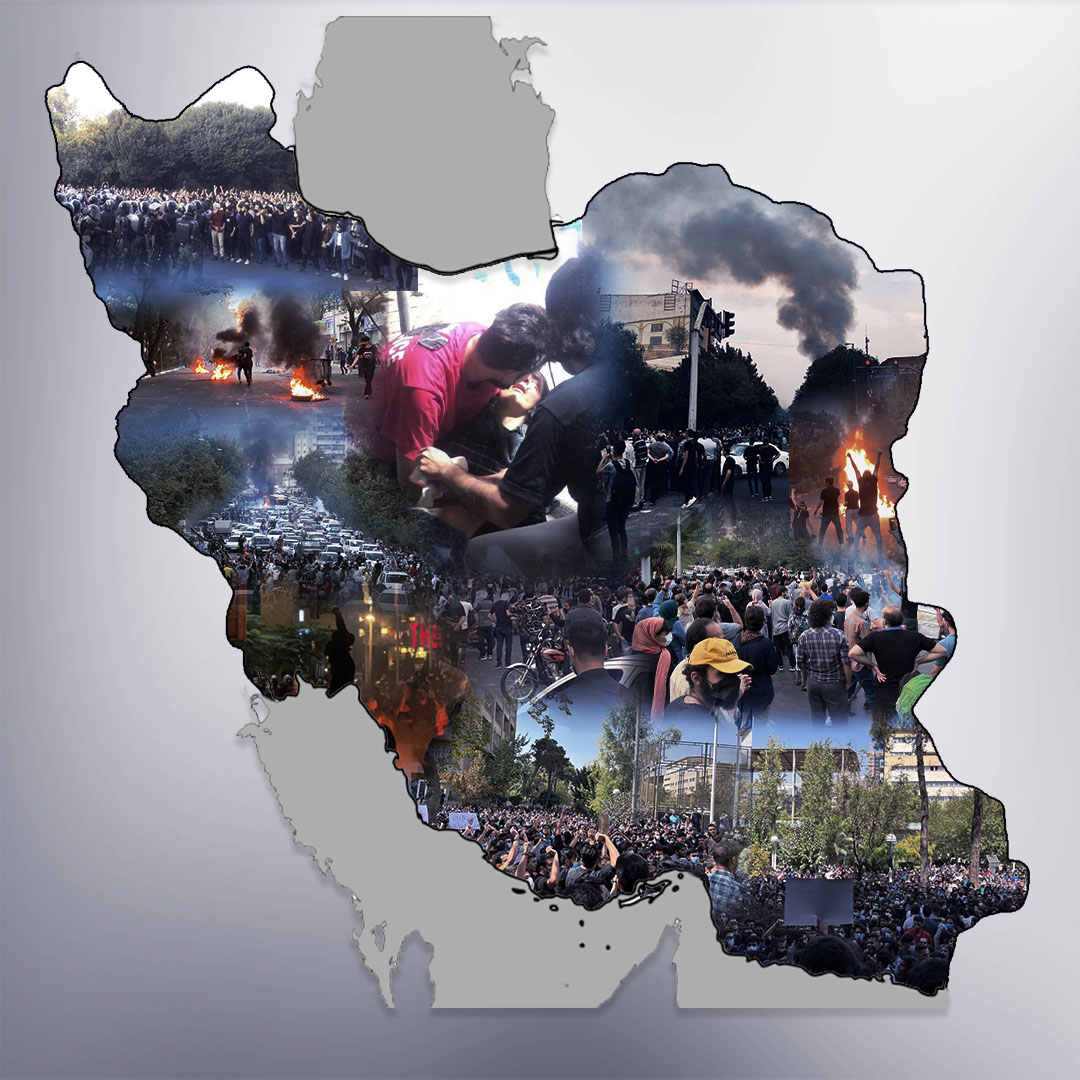 Protesters chanted, “This year is a year of sacrifice. Seyyed Ali (Khamenei) will be deposed,” “Death to the oppressor, whether the Shah or the Leader (Khamenei),” as they marched through Tehran, including Keshavarz Boulevard, Vali-e Asr Square, Hafez, Shahr Theater, Narmak, Tehran Pars, and Sadeghieh. SSF agents used tear gas on demonstrators in the subway and attacked people on Keshavarz Boulevard, but were met with resistance.

People set fire to repressive forces’ vehicles in Mashhad, Hamadan, and Arak. People took to the streets in Kermanshah, chanting “Death to the dictator” and “Death to Khamenei.” Security personnel opened fire on the crowd. Rebellious youths blocked the streets by lighting fires.

The high fighting spirit of women and girls who in step with freedom-loving youths and men drive back the IRGC mercenaries with chants of “Death to Khamenei,” is the promise for a democratically elected republic based on gender equality and national sovereignty. pic.twitter.com/n0mWc3LAkS

Ilam residents joined the nationwide uprising, chanting “Death to Khamenei,” “We will fight, we will die, and we will reclaim Iran.” Demonstrators bravely confronted and punished SSF agents in Qazvin and Qom. They also set fire to the “morality police” and SSF vehicles. “Bloodthirsty Khamenei, we will bury you,” Shiraz residents chanted in Ma’ali Abad.

Tabriz residents clashed with SSF and plainclothes agents, chanting “Mullahs must go!” and “Shame on you!” “You are a disgrace!” and “We are prepared to die.” Outraged youths in Rasht blocked the street and forced special unit agents riding motorcycles to flee by hurling rocks at them. They also set fire to the vehicles of the repressive forces.

Several youths have been shot and killed in the last three days, including Fereydoun Mahmoudi in Saqqez, Mohsen Mohammadi in Diwandarreh, and Reza Lotfi in Dehgolan.

According to IRNA, Mohammad Baqer Qalibaf, the regime’s parliament speaker, said during a public session on Tuesday: “The enemy has put incitement and creating chaos in the country on its agenda as its routine. Unfortunately, some people within the country are moving in the direction of the enemy’s wishes, willingly or unwillingly. But our dear people have demonstrated their political acumen by refusing to cooperate with the MEK, which has martyred thousands of ordinary people and now claims that one person had died.”

Over 200 people have been killed by the mullahs' security forces. Sources also report over 10,000 arrested protesters. #IranProtests2022 #MahsaAmini#مهسا__امینی pic.twitter.com/rag6KIQNYj

On Tuesday, the state-run website Eslam-e No reported a tweet by Tehran Governor Mohsen Mansouri, in which he wrote: “The main elements of tonight’s gatherings in Tehran were fully organized, trained, and had plans to cause disruptions in Tehran. Pouring diesel fuel on roads, hurling rocks, attacking police, setting fire to motorcycles and garbage cans, destroying public property, and so on are not actions that ordinary people would engage in.”

Mrs. Maryam Rajavi, President-elect of Iran’s National Council of Resistance (NCRI), congratulated the risen youths and stated that Iran is united in its fight for freedom. Rebellious cities are banding together from the capital Tehran to the west and east, north and south. The resounding cries of “this month is the month of sacrifice, Seyyed Ali (Khamenei) will be deposed” and “this is the final message, the regime itself is the target” have shaken the mullahs’ regime’s pillars in Tehran’s streets.

Courageous women and youths have taken to the streets in Tehran and other cities for the 11th day. #IranProtests have expanded to 154 cities. 200 have been killed, 10,000 arrested. I urge the international community to take urgent action to free those detained.#IranRevolution pic.twitter.com/wYj7wRSXBG