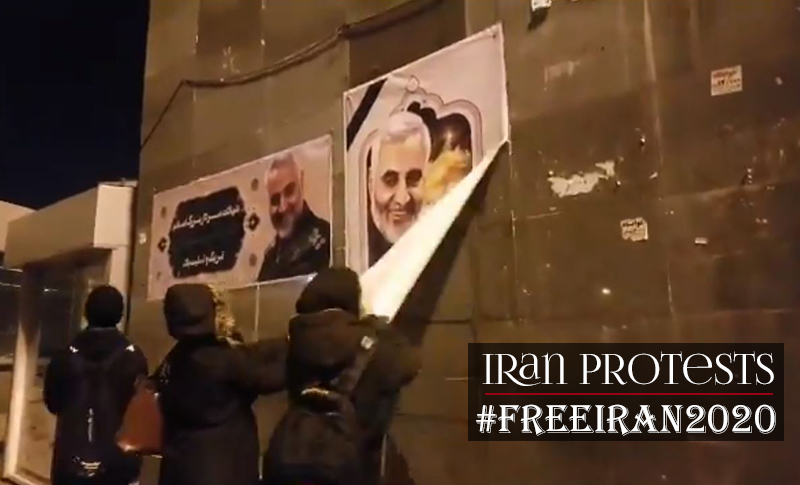 New Horizon has been designated by US Treasury Department as a front for the Revolutionary Guards corps. It was also responsible for drawing in Monica Witt to spy for the regime. What other Americans are tied to New Horizon and its chief Nader Talebzadeh? https://t.co/TD1t3JvYot

Talebzadeh also agreed that the regime’s terrorist activities still persist, despite Soleimani being eliminated. He also supported the fact that the regime was involved in the attacks on the US embassy in Iraq which took place recently. He said the U.S. had no idea how to deal with the regime’s handling of terrorism. A year ago an airstrike commanded by the U.S. killed Soleimani when he was with a convoy at Baghdad International Airport.

Talebzadeh is saying what the Iranian Resistance, (NCRI) and (PMOI / MEK Iran) has been saying for a long time and that is that Iraq and other Middle Eastern countries have suffered badly due to the regime’s terrorist activities.

The National Council of Resistance of Iran (NCRI), on January 5th, published an article called “Who was the vicious criminal Qassem Soleimani” which disclosed details regarding Soleimani’s role in using IED bombs to attack members of the Iranian opposition, (NCRI) and (PMOI / MEK Iran) and the coalition forces based in Iraq. These deadly IEDs were used often in the Iraq war from 2003 to 2011. By April 2019, the Pentagon admitted that Iran could be blamed for 17% of U.S. service personnel deaths from 2003 to 2011.

These deadly IEDs were manufactured secretly in factories in Iran under the control of the Quds force and were distributed throughout Iraq and Afghanistan. These same military factories, later on, manufactured a much more powerful and deadlier roadside bomb which was given the name explosively formed projectiles (EFPs). The Quds Force in Iran was responsible for their production and with the advancement, in design, there were far deadlier than any other. The National Council of Resistance of Iran published the precise location of these factories on July 25th, 2006, and 29th January 2009.

“The Quds force developed this “Improvised Explosive Device (IED)” especially to target MEK convoys in Iraq in the 90s. By the end of 2002, more than a dozen roadside bombs, such as IEDs and vehicle bombs, were used to attack MEK convoys, resulting in many members being killed or severely injured.

Who is Nader Talebzadeh?

On February 13th, 2019, the U.S. State Department imposed sanctions on two institutions and nine individuals who were closely associated with the Iranian regime. One was called the “New Horizon Organization” while Nader Talebzadeh and Zainab Mohana Talebzadeh were two of those who had sanctions imposed on them.

The IRGC backs the New Horizon institution, and authorities agree that it liaises with Khamenei’s office. Its key job is to provide cultural cover for the terrorist attacks performed by the IRGC Quds Force. This is by holding “conferences” and putting on recruitment events to encourage Iranians to join the IRGC’s, Quds Force.

New Horizon has been known to get foreign agents to produce and spread defamatory material against the Iranian opposition, including the MEK. A key example is what took place at New Horizon’s 6th conference held in May 2018 in Mashhad. Representatives of the Ministry of Intelligence and Security (MOIS) supported and distributed many books and publications written by the MOIS against the MEK in English. The event was also used to tarnish the image of the MEK.

Talebzadeh’s words confirmed that it agreed with the Iranian Resistance’s (NCRI) and (PMOI / MEK Iran) calls to the international community to take a firm stand against the terrorism sponsored by the Iranian regime. So far, all the EU has done is to appease Iran, which basically means Iran does whatever it wants and eagerly uses terrorism in  Europe which was shown by the arrest and recent trial of Iran’s diplomat-terrorist, Assadollah Assadi, who attempted to bomb the NCRI’s gathering in 2018 in France.