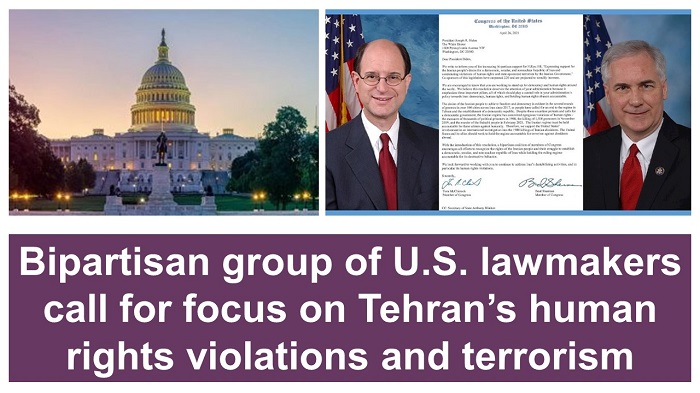 The National Council of Resistance of Iran (NCRI), and the People’s Mujahedin of Iran (PMOI / MEK Iran), reported that a bipartisan group of members of the U.S. Congress co-sponsored a resolution calling for a firm policy toward the mullahs’ regime.

A bipartisan group of U.S. lawmakers

On Tuesday 27th April 2021, a resolution co-sponsored by 225 members of the U.S. House of Representatives calls on the Biden Administration to support the Iranian people in their struggle to achieve a free and democratic Iran that lives in peace with the rest of the world.

The resolution first introduced in February, H.Res 118 calls for “support for the Iranian people’s desire for a democratic, secular, and nonnuclear Republic of Iran” and condemns “violations of human rights and state-sponsored terrorism by the Iranian Government.” It now has the support of the majority of the House.

On 27th April 2021, an online conference held by, the Organization of Iranian American Communities (OIAC), presented the resolution. The event featured speeches from members of Congress and representatives of the Iranian diaspora.

Congressman Tom McClintock (R-CA), the sponsor of H.Res. 118, said at the conference: “The Iranian people have resisted nuclear adventurism. They want a non-nuclear country,”. He added: “What is abundantly clear is that this regime, from its highest levels of power and corruption, has been engaged in undermining treasured diplomatic norms and privileges while pretending to seek diplomatic engagement with the international community,”.

Congressman Brad Sherman (D-CA), the lead Democratic sponsor of the resolution, said: “Congress sends a strong message to Iran that the United States does not tolerate the ongoing human rights violations perpetrated by the Iranian regime,”.

H.Res. 118, the resolution makes reference to two major rounds of nationwide protests in Iran in 2018 and 2019. Both uprisings were marked by the widespread participation of Iranians of all walks of life and slogans that called for the overthrow of the mullahs’ regime in its entirety.

The regime has only managed to prevent its collapse through sheer violence and repression, including the killing of 1,500 protesters in 2019, a brutal wave of ongoing executions, and thousands of protesters lingering in prisons under barbaric torture. In September 2020, Amnesty International published a report detailing the torture that was still being meted out at that time to participants in the 2019 uprising.

One of those prior resolutions was similarly focused on the human rights abuses associated with recent political demonstrations, while the other, H. Res. 4744, passed by the 115th Congress, condemned Tehran’s abuses of dissidents and activists more generally, and focused particular attention on the massacre of 30,000 political prisoners in the summer of 1988.

H.Res. 118 the House resolution also draws attention to the Iranian regime’s state-sponsored terrorism, highlighted by a recent verdict by a Belgian court that convicted four Iranian regime operatives, including a career diplomat, of attempting to bomb a large rally of the Iranian opposition in France.

Support for the ten-point plan

Resolution H.Res. 118 is support for the ten-point plan of Mrs. Maryam Rajavi, the president-elect of the National Council of Resistance of Iran (NCRI). The resolution describes that plan as calling for “the universal right to vote, free elections, and a market economy,” as well as advocating “gender, religious, and ethnic equality, a foreign policy based on peaceful coexistence, and a non-nuclear Iran.”

Support for regime change in Iran

The resolution H.Res. 118 concludes by declaring that the U.S. House of Representatives “stands with the people of Iran who are continuing to hold legitimate and peaceful protests against an oppressive and corrupt regime; and recognizes the rights of the Iranian people and their struggle to establish a democratic, secular, and nonnuclear Republic of Iran.”