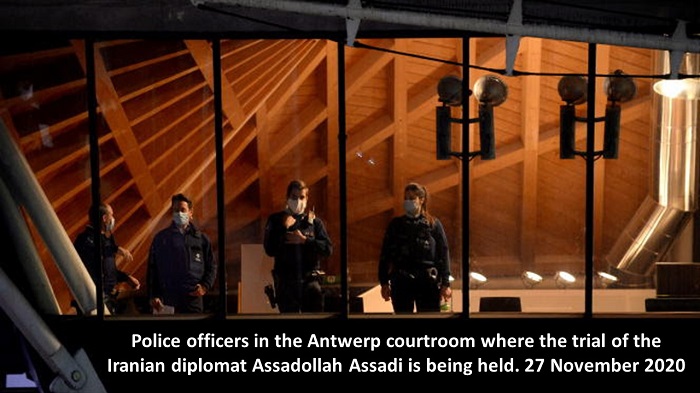 A verdict will be made about Iran’s own diplomat-terrorist, Assadollah Assadi, as well as his three accomplices on February 4th, 2021. Assadi has been charged with terrorism offenses in Belgium after he was caught red-handed attempting to organize the bombing of the Iranian opposition, the National Council of Resistance of Iran’s (NCRI), and the People’s Mojahedin Organization of Iran (PMOI / MEK Iran)’s Free Iran rally at Villepinte, near Paris, in June 2018.

According to an article in the French newspaper, Le Monde, the Iranian regime has done whatever it could to get Assadi freed, without success. Evidence showed, according to Le Monde, that “confirms the amount of attention that Tehran is paying to Assadi’s case.

A note drafted by security and sent to the federal prosecutor’s office, in charge of terrorism cases, detailed, in August 2019, the numerous visits by Iranian officials to Mr. Assadi, then in preventive detention in Belgian Limburg.”

Le Monde said that at least 14 different people associated with the regime had visited Assadi while he was in detention. Some were Iranians who were doctors and lawyers residing and working in France. Then there was the Iranian ambassador to France and several others who were more closely connected to the Iranian government.

“They had come from Tehran as a delegation and told Belgium that they were members of the foreign ministry. However, the Belgian authorities have only been able to identify three of them.”

The picture became clearer, according to Le Monde, after an appraisal of the testimony provided by the National Council of Resistance of Iran’s (NCRI’s) president-elect, Mrs. Maryam Rajavi.

Mrs. Maryam Rajavi “gave investigators a note detailing the role of some of these officials. One of them was, in fact, one of the main leaders of the Ministry of Intelligence and Security, in charge of overseeing agents stationed in foreign countries and acting undercover,” according to Le Monde.

Le Monde added that “a special committee bringing together different services has also been set up in Tehran to follow up on the Assadi case. Assadi himself threatened Belgium with possible retaliation if it condemns him.”

The regime in Iran has tried its usual blackmailing tactics to release Assadi. It announced that it would execute Ahmadreza Djalali, an Iranian-Swedish academic who taught in Belgium.

The Belgian Parliament didn’t buckle and approved a resolution that threatened to cut off all relations with Tehran if it went ahead with the execution. The mullahs have suspended the execution as a result.

The next attempt to get Assadi released was to call the Belgian court “illegitimate.” This came from a regime that has committed numerous atrocities and whose Judiciary Chief was partly responsible for one of the worst of them, the 1988 manslaughter of 30,000 political prisoners. Many of the victims were either members or supporters of the People’s Mojahedin Organization of Iran (PMOI / MEK Iran).

Assadi’s trial has a lot of significance as it is the first time that an Iranian diplomat has ever stood trial in Europe on a terrorism charge. The Iranian regime is desperate to have the trial and verdict stopped.

The regime has tried to assert that Assadi has “diplomatic immunity.” However, this ludicrous assertion didn’t wash with the Belgian authorities who said that as Asadi had been attempting to commit mass murder, it meant he could not claim immunity.

Le Monde has hit the nail on the head when it says that “according to the long investigation by the Belgian justice, state security, and the intelligence service, the whole operation was designed at the highest level in Tehran, in connection with the defendants who had worked for a long time for the [regime’s] Ministry of Intelligence and Security.

Jaak Raas, the head of the Belgium security, said the action was instigated ‘in the name of Iran, under its leadership.”

Jaak Raes — the head of the Belgian State Security Service [VSSE]: "Not my Job to Monitor Foreign Spies!" https://t.co/SnuEzDhyoW via @wordpressdotcom pic.twitter.com/tdzAZo9E2d

The trial of Assadi and the likelihood that he will be convicted is a golden opportunity for the European Union and its constituent governments to end its unstated policy of appeasing the Iranian regime. It can start by closing down all Iranian diplomatic missions and expel its so-called diplomats, many of whom are masquerading as spies and organizers of state-sponsored terrorism.

Iran’s Foreign Minister, Mohamad Javad Zarif, should be persona non grata for his association with Iran’s Ministry of Intelligence and Security and the Revolutionary Guards.