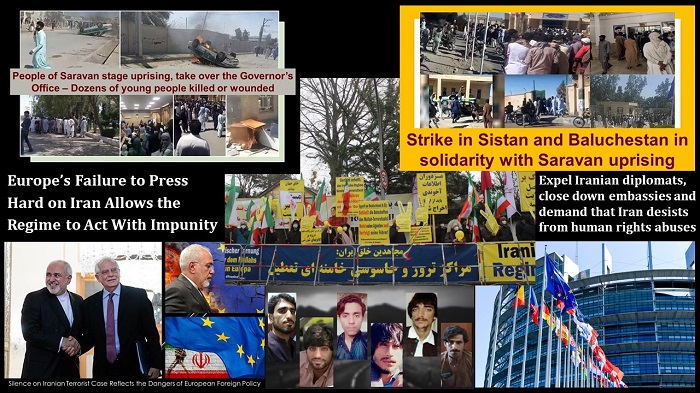 The delay in the proposed EU- Iran Business Forum occurred not because of the ongoing trial of four Iranians accused of a terrorist plot in the heart of Europe fully sanctioned by the Iranian regime but because that same regime brazenly threatened to execute a European resident in Iran, Ruhollah Zam.

Executions and torture are daily exercises

They even went ahead and did just that. The National Council of Resistance of Iran (NCRI), and the People’s Mujahedin of Iran (PMOI / MEK Iran), reported that the execution of Zam was just the tip of the iceberg in Iran as executions and torture are daily exercises.

Rather than expel Iranian diplomats, close down embassies, and demand that Iran desists from human rights abuses and external terrorist activity, the EU has simply delayed the Business Forum until early March.

Josep Borrell has taken no notice

The EU foreign policy chief, Josep Borrell, appears to have taken no notice of Iran’s severely blemished record and has instead plumped for putting Europe’s supposed economic interests ahead of its security.

Former Polish FM, MEP Anna Fotyga, and 21 other MEPs in a letter to @eu_eeas officials urge to not participate in the Europe #Iran business forum that scheduled for 1-3 March 2021! #EuropeIranBusinessForum #EUTime4FirmIranPolicy pic.twitter.com/OitiO5uJN8

The fact that the EU is prepared to ignore continued human rights abuses in Iran, including the worst execution rate in the world and the export of terrorism outside of Iran’s borders, will simply make the regime in Iran even more complacent about what it can and cannot do.

This will have its effect down the line over any negotiations about the JCPOA nuclear agreement. Given the fact that the EU is ignoring everything else that Iran’s leaders are doing will simply send a signal to the mullahs that they can get away with non-compliance with the terms of the JCPOA agreement as well.

The most recent crackdown in Iran has been badly reported in Europe, partly because of the habit of the mullahs of closing down the Internet every time they don’t want news about their repressive actions to leak out.

The uprising in Sistan & Baluchistan province was sparked by brutal shootings of porters, locally called “sokhtbar” in border cities by the IRGC (Islamic Revolutionary Guards Corps). Dozens of porters were reported to have been killed and many more injured.

The regime insists that the crackdown was to curb illegal smuggling of fuel by the porters, but this ignores the fact that the IRGC is widely recognized as the most significant smuggler in Iran by volume of smuggled goods and illegal revenue that flows through to the coffers of regime officials.

No word of condemnation has been uttered by the E.U. over this latest atrocity committed by the people it so sorely wants to have a business forum with. Mohammad Javad Zarif, the regime’s Foreign Minister, has been invited to make a speech alongside Josep Borrell at the meeting in Tehran in early March.

One wonders what the EU contingent would say if Zarif waxed eloquently on about the regime’s extrajudicial killings and its habit of plotting to blow up hundreds of attendees at a rally in the heart of Europe.

Zarif has been a part of the cruel regime in Iran

He won’t, of course, but Zarif has been a part of the cruel regime in Iran and would have been part of decisions it has made about the regime’s conduct outside its borders.

Tehran at this stage thinks it can get away with doing whatever it wants wherever it wants as the potential opposition to its actions is currently muted for apparent strategic economic reasons. The international community continues with this policy of appeasement at its peril.