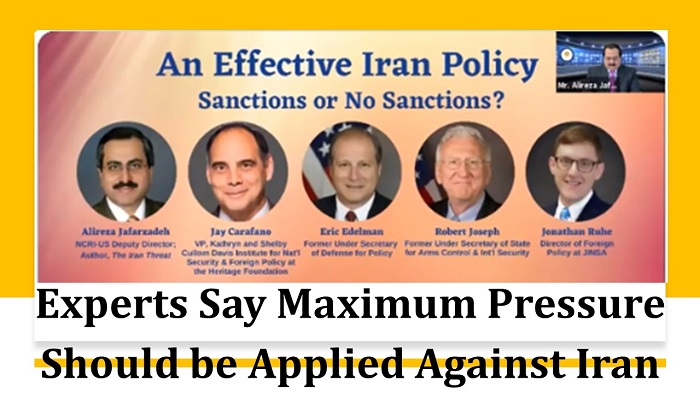 A panel of experts hosted by the U.S. branch of the National Council of Resistance of Iran (NCRI) has concluded that maximum pressures should be applied against the Iranian regime so that it “collapses.” In the view of the experts, this could avert one of the world’s greatest threats to international security.

The event hosted by the NCRI was entitled: “An Effective Iran Policy: Sanctions or No Sanctions?”

Several aspects of Iran’s relationship with the wider world were discussed by the panel including the Joint Comprehensive Plan of Action (JCPOA), the regime’s nuclear ambitions, and the status of domestic opposition within Iran. This discussion followed efforts by the U.S. to enforce a snapback of sanctions against the regime as well as the arms embargo against Iran re-imposed earlier this year.

“This isn’t a regime we can do business with. There’s simply no prospect of good-faith negotiations (with it),” said former U.S. special envoy, Robert Joseph. Joseph thinks that pursuing further diplomatic efforts are useless. Joseph added that “yes, you can negotiate and even come to an agreement, but the regime has cheated on every agreement it has made with regard to its nuclear program.”

Amb. Robert Joseph: Iran's regime will not abandon its nuclear program & will try to keep a path toward nuclear weapons. It will not become more moderate. Intl community should be doubling down sanctions & other means of pressure on regime.#IranSanctionshttps://t.co/r3G09N0aIK

“The current policy of maximum pressure is the best policy, and the best means to deny the regime the capability to conduct terrorist acts, to pursue armed aggression against its neighbors and to oppress its people. We … should be doubling down on debilitating sanctions and other means of containment.”

Joseph voiced his criticism of European governments for not backing the U.S. request to extend the arms embargo on Iran. “Our European friends, on the question of the arms embargo, would say in private, ‘That’s exactly the right thing to do. We must continue the embargo.’ But when it came time to vote, they didn’t have the intestinal fortitude to stay with a principled position.”

.@JJCarafano: Iran’s nuclear program is a global threat. Terrorism & support for terrorist groups are twin challenges that we must deal with.
The U.S. sanctions are meant to deal with these threats. sanctions should continue.#IranSanctions #Iranhttps://t.co/BU02CJzmqD

Dr. Jay Carafano, vice president of the Kathryn and Shelby Cullom Davis Institute for National Security and Foreign Policy at the Heritage Foundation think tank, agreed, saying “in the greater Middle East, the US recognizes that the regime in Iran is the greatest threat to peace and stability. That’s twofold: One is the nuclear issue — if Iran went nuclear, other countries would feel compelled to do likewise. This proliferation is incredibly dangerous and destabilizing. Equally concerning is Iran’s other activities: State sponsorship of terrorism, supporting insurgents and surrogates in the region and around the world, destabilizing other countries.”

Carafano added that “the Iran sanctions are designed to deal with both of those. Sanctions aren’t a strategy; they’re a component of a strategy.”

There have been explosions of dissent in late 2017, early 2018 and after the shooting down of the Ukrainian airplane. We must help the opposition to the regime reach critical mass.#Iran#IranSanctionshttps://t.co/RTuT3D1xTg

Eric Edelman, former US undersecretary of defense for policy, backed the idea of enforcing a system “beyond sanctions.” Edelman said “sanctions alone aren’t going to be enough to get a conventional outcome. While I think the sanction effort is important, I think it’s equally important to keep the focus on Iran and keep Iran isolated, and not to let the US become isolated. What I think we need is a comprehensive policy … and that means not just sanctions and pressure on the nuclear issue, but addressing a whole range of issues in which Iranian behavior is problematic.”

Edelman went on to say that to undermine the regime in Tehran, the regime would have to be isolated externally as well as greater assistance to the Iranian opposition, the National Council of Resistance of Iran’s (NCRI), and the People’s Mojahedin Organization of Iran (PMOI / MEK Iran), the movement would have to be made. “There have been explosions in dissent … It’s clear that there’s disquiet in the population … This requires a mix of both covert and overt assistance to the domestic opposition,” he said. “It also requires constant efforts by the US government to highlight the human rights abuses by the regime and the corruption of the regime, which is the regime’s Achilles heel.”

If the regime in Tehran looked after its people properly, then there would be no need for sanctions, Carafano said.  “If the regime really wanted to take care of its people, it could take all the money that it’s spending on surrogates and sponsorship of terrorism, and building out a secret nuclear weapons program,” Carafano said. “There’d be more than enough money to take care of the Iranian people. And if they did that, there’d be no need for the sanctions in the first place.”

As Robert Joseph said: “we must support the democratic opposition, NCRI and (PMOI / MEK Iran), both outside and inside, Iran. This isn’t about using military force to invade the country, to occupy the country; in my view, that would be a fundamental mistake. We know that regime change must come from within. We know that regime change will come from within. We must not throw the regime a lifeline. That will only prolong the regime’s terrorism, its regional aggression, and the specter of a nuclear breakout. We must not return to the failed policies of appeasement, a path that’s often characterized as a path between diplomacy or war. This was, and remains, a false choice. More agreements will only lead to more aggression and more brutality.”