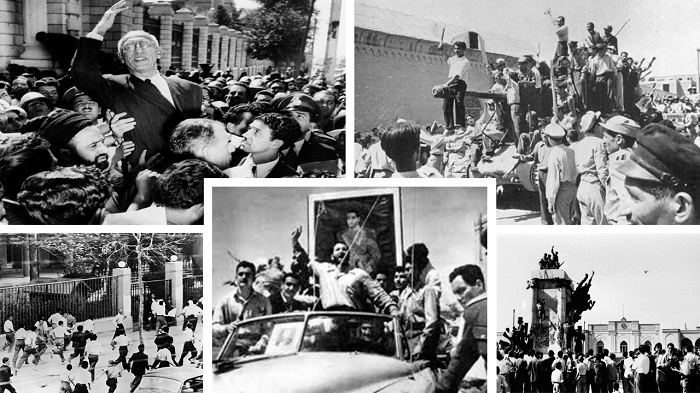 The US elections have had a great impact on Iranian political sovereignty, dating back to the 1953 Iranian coup d’etat; during which the US bribed Iranian government officials, reporters, and businessmen in support of the Shah’s power. The governments of the Shah and the clerical regime have closely watched the outcome of US elections for the last 67 years, and the results have direct and indirect consequences for the policymaking of Iranian leaders.

The 1953 Iranian coup d'état, known in #Iran as the 28 Mordad coup d'état, was the overthrow of democratically elected Prime Minister Mosaddegh in favor of strengthening the monarchical rule of the Shah, Mohammad Reza Pahlavi on 19 August 1953, orchestrated by the US. #MEK pic.twitter.com/tTCPyKNUYx

The Supreme Leader Ali Khamenei and President Hassan Rouhani maintain that the outcome of the approaching high-stake US election has no effect on the regime’s policies. However, in reality, the government is looking to the US election results more than any other period in the last 30 years and persistently lobby for their political gain. US policy towards the theocratic regime has shifted over the past four years, inhibiting the decades-long appeasement the regime has received from the international community.

Ex Italian MP, Senator & Mayor Paolo Corsini: The West should end appeasement of Iran's regime. We should support Iran's ppl & the MEK to bring about regime change. A viable alternative to the regime exists in Iran. It is the NCRI.#FreeIran #IStandWithMaryamRajavi #WeSupportMEK pic.twitter.com/LzeGVYJJim

The theocratic regime has typically enjoyed appeasement from the US government, as well as assistance in their criminal interference in Iraq and Syria. The international community as a whole has neglected to intervene in some of the regime’s worst human rights atrocities committed in recent history.

This includes the murder of political dissidents throughout the 1980s, such as the 1988 massacre of political prisoners, mostly members of the resistance movement, the People’s Mojahedin Organization of Iran (PMOI / MEK Iran), and the ongoing public killings and executions of protestors, such as the Navid Afkari, the Iranian wrestling champion.

If the US and European governments take a firm stance against the heinous actions of the regime, they will be unable to commit such acts of suppression. Thus, without the appeasement of the US government, the sovereignty and oppressive rule of the regime will become more difficult to maintain.

Amnesty International’s new report about #HumanRights abuses in #Iran’s prisons has sent shockwaves across the world.https://t.co/LmNNENCA8Q

Mrs. Maryam Rajavi the President-elect of The National Council of Resistance of Iran’s (NCRI): The time has come for the closure of the Iranian regime’s embassies which serve as centers for terrorist operations. The clerical regime’s leaders must be held accountable and punished for their crimes.

The state media in Iran is able to reveal some of the reality of the regime’s attitude towards the US elections with their reporting and analysis of the state’s affairs. The state-run Aftab-e-Yazd daily reported on 29 October: “Some on both sides have linked the outcome of the US election to the state of Iran’s presidential election in the spring of 2021. The issue of US elections has received too much attention among politicians, which is more than enough,”

The time has come for the closure of the Iranian regime’s embassies which serve as centers for terrorist operations. The clerical regime’s leaders must be held accountable and punished for their crimes. #Iran #NoImpunity4Mullahs

The publication continued by expressing the impact that the US elections have on the 2021 election of the regime: “The main challenge in the country’s political scene today is the expectations of the people, who should receive priority to foreign events. The challenge is a loss of public trust in the authorities. This is an issue that, if no solution is found, we will see the lowest turnout in 2021.”

In its 29 October edition, Arman daily also reported the consequences of the US election for the future of the Iranian regime: “Society is in an overt and covert abandonment. Given the upcoming 2021 presidential election, if the current practice does not change, the low turnout in the 2021 election will be a fatal blow! So, the danger is lurking.”